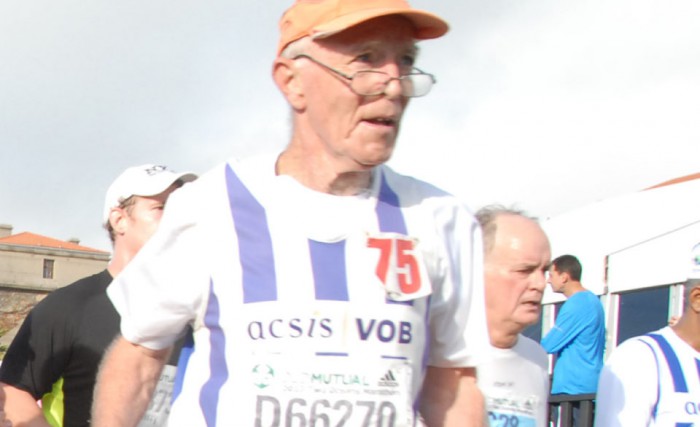 Running 100 marathons is a lifetime goal for many runners, but few set themselves a goal of 100 in a decade, let alone 100 after they turn 70… but that is exactly what Derry Devine recently achieved – and he isn’t finished yet!

In mid-November, the ever jovial 78-year-old Derry Devine of the K-Way Varsity Old Boys Club in Cape Town lined up at the Winelands Marathon in Stellenbosch to run his 99th marathon since turning 70. A week later he completed the Die Vlakte Marathon from Heidelberg to White Sands to complete his ton. “I run just to keep fit mostly, but I thought I could pass the figure of marathons I did before my 70s, which was two in my 50s, when I started running at age 58, and 88 in my 60s,” says Derry. “It’s a really skewed result, isn’t it – and there’s no way that will be repeated in my 80s, I can assure you! If I manage five or six in my 80s I will be very happy.”

Incredibly, within weeks of achieving his goal, Derry also ran his 500th half marathon and 400th 10km since taking up running, and his meticulously kept logbook also lists 20 ultras, including two Comrades, five Two Oceans and eight Cape Town 100 milers. However, a week after Die Vlakte, his intended 191st marathon didn’t quite go to plan. “I wanted to run the new Prison to Prison Marathon in Worcester, but my calf gave in at 13km. I could barely walk, let alone run, so I had my first marathon bail in 19 years!”

The topic of bailing actually gets Derry chuckling. “I have bailed twice in the Two Oceans and once in the Comrades, and once in the Tygerberg 30km, and it’s always a muscle that gets me, but in the 2012 Paarlberg Half Marathon, the skies opened and we were absolutely soaked before we even got to the start. Rob Lanning and I had just started running, then looked at each other and said, ‘Let’s go back and have a nice breakfast at the Wimpy.’ So we turned around and that was that, but the club got to know about it and I was awarded the bailer’s award for 2012, for bailing after 100m in a 21km.”


Derry was born in Ireland and has been married to Maura for 53 years. They have three daughters, living in Belgium, Luxemburg and Canada. The Devines came to South Africa for the first time in 1963, then settled here permanently in 1984, with Derry working as a lawyer. Now retired from practice, he continues to work as professor emeritus lecturing part-time in legal subjects at the University of Cape Town. Even now, Derry still runs three to four times a week, including a weekly club time trial, and shows no signs of bowing out of running just yet.

“I do about 70 to 80 races a year, including some weekends with two races, and I like the companionship of running, and meeting up with the same people each week – the back-packers of course, not the elites. I turn 79 in April, and reckon I can do another four of five marathons this year and another four or five next year. But that’s being optimistic, and I have to pick ones that give at least five and a half hours – no more sub-five marathons for me. My times are getting slower and slower, but I am always learning new things about myself, like sometimes I can walk up a hill faster than I can run it!”