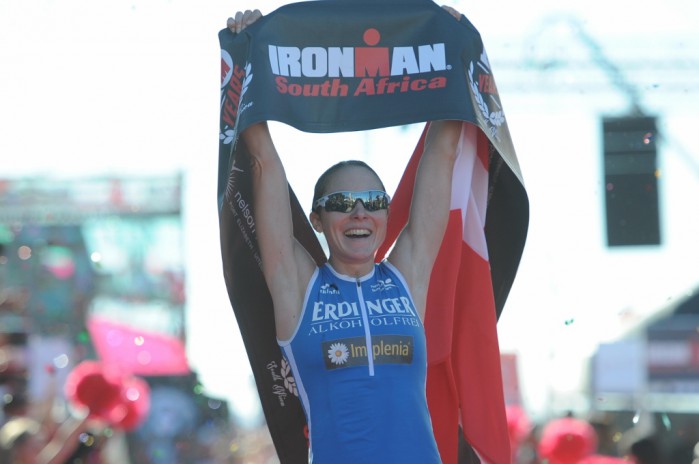 The professional field at Sunday’s Ironman South Africa in Port Elizabeth put on an impressive showing in the warm and blustery conditions on the Sunshine Coast.

In the Men’s race, from the start there were only four real contenders for the title on race day. 2005 Ironman World Champion Faris Al-Sultan, Germany’s Nils Frommhold, Bas Diederen and South Africa’s rising star Kyle Buckingham were out of the water first and the rest of the field never came close to challenging them for the rest of the day. In the end it was Nils Frommhold who led from start to finish with the best swim, bike and run splits on the day that crossed the finish line first. Kyle Buckingham, who dropped down to third on his final lap of the run put in an impressive surge in the final stages to reclaim second place while the veteran Faris Al-Sultan was relegated to third with Bas Diederen claiming fourth.

The ladies race was equally spectacular with Britain’s Jodie Swallow exiting the water with the leading pack of men and once again, just like she did in 2013, put in an impressive performance on the bike. With more than an eight minute advantage heading onto the run it was fascinating to watch as the chasing pair of Lucy Gossage and Simone Brandli slowly reeled the former Ironman 70.3 World Champion in. The last lap of the run once again proved crucial as the two chasers made their move. It was Switzerland’s Simone Brandli who broke the tape first, followed by the two Brits Lucy Gossage and Jodie Swallow. You can access the full race report here but on Tri Talk SA this week Brad Brown caught up with most of the stars from Sunday’s race.