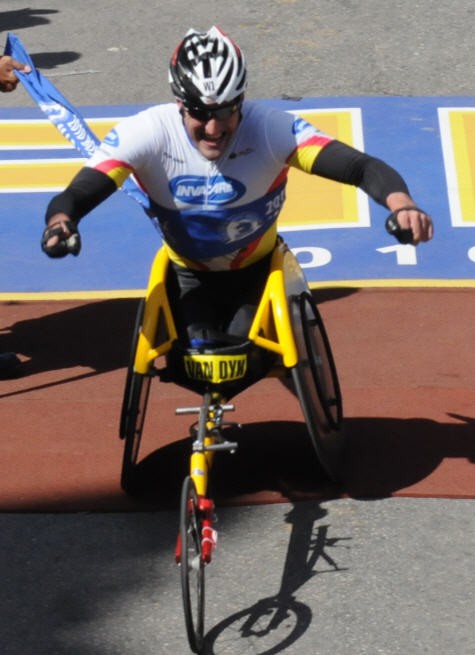 It was a historic Boston Marathon in Massachusetts on Monday. South Africa’s Ernst van Dyk became the first athlete ever to win ten titles at the marathon showpiece. The 41 year old wheelchair racer finished in a time of 1:20:36, his second fastest finish time ever, slower only to the course record of 1:18:27 that he set in back in 2004.

The veteran South African, who dominated the race from start to finish, crossed the line 38 seconds ahead of Japan’s Kota Hokinoue, who claimed second in 1:21:14.

It was also a historic day too for Meb Keflezighi who won the overall men’s race in a time of 2:08:37 and in doing so became the first American to win the Boston Marathon since Greg A. Meyer did it in 1983. Eritrean born Keflezighi broke the 29 year American duck just a year after a terrorist attack at the 2013 edition of the race killed three people and left more than 260 injured. The 38 year old, who won the New York Marathon in 2009, honoured the victims of the bombing by running with their names on his race bib.

History was also rewritten in the women’s elite race with Kenyan Rita Jeptoo defending the title she won in 2013 in a new course record of 2:18:57. Jeptoo claimed her third Boston Marathon title with a winning margin of over a minute from Ethiopia’s Buzunesh Deba who crossed the line in a time of 2:19:59 with countrywoman Mare Dibaba in third. All three of the leading ladies ran faster than the previous course record.