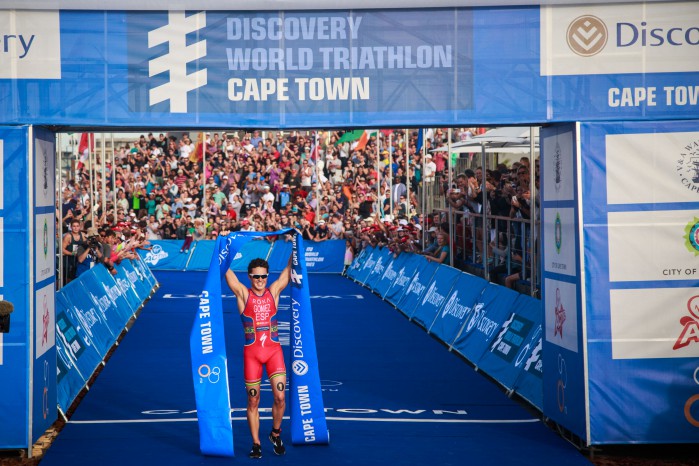 As the series made its debut in Africa, Gomez put the hammer down with around 4km to go. Just like in the series opener in Auckland, Brownlee just could not stick with him. It means Gomez holds onto the lead in the Threadneedle rankings and looks the one to beat in the race for the 2014 world title. But Gomez revealed afterwards he was not confident at the start of the 10km run.

Brownlee was filled with nothing but praise, admitting he just did not have Gomez’s measure again.
“I was even more impressed this time, to be honest with you, In Auckland I let him kind of run the race at the front,” Brownlee said. “Here I thought I would change it up a bit but every time he went for it, I kind of counter attacked and then he counter attacked again and dropped me. It’s as simple as that. He was very impressive today. He was strong on the bike, strong in the swim and then on the run. He was a lot better than me on the run, so well done to him.”

It added yet another chapter to their rivalry, as Gomez now just leads in WTS encounters. In 19 races, Brownlee has five wins and Gomez six. It is also the third consecutive time Gomez has beaten the younger Brownlee brother, after last year’s London Grand Final and the season opener in Auckland.
While the top two podium places were again filled by Gomez and Brownlee, it was Russia’s Dmitry Polyanskiy who re-captured his best form to collect another career WTS medal.

The men’s race started with a two-lap 750m swim in the V&A Waterfront. Slovakia’s Richard Varga assumed his regular position at the front of the pack and the frenetic pace he set started to string out the field quickly. While Gomez and Brownlee were just on his heels, pre-race podium threats Mario Mola and Richard Murray had already lost significant time after the first lap, falling more than 20 seconds back. That gap increased on the second lap of the swim, and those at the front made it count by forming a 14-strong lead group on the bike.

Led by South Africa’s Henri Schoeman, Jonathan Brownlee, Javier Gomez Noya and Aaron Royle, a 14-man lead group came together on the first lap and worked together to push the pace. While a quad of men that included Joao Silva and Gordon Benson was initially in touch with the leaders, they quickly fell back to the large chase group. With the technical course providing less breakaway opportunities, the trailing group of 25 struggled to regain time across the 40km bike.

Although Australia’s Declan Wilson, Cameron Good, Mola, Murray and company sweated to keep the pace steady, their effort was not enough to close the gap on the leaders. At the halfway point of the 40km bike, the gap to the chase pack was 53 seconds, while a third chase pack led by Conor Murphy was 2 minutes and 25 seconds down. That gap increased slightly at the second transition, to 1:20, just enough to see Mola and Murray out of podium reach.

With five WTS medallists in the lead group, including Brownlee, Gomez, Royle, Polyanskiy and Vincent Luis, and two others who have recorded top-5 finishes in Schoeman and Alessandro Fabian, positioning became paramount. It was Germany’s Justus Nieschlag who stepped out in front from T2, but Brownlee and Gomez quickly moved to the front to resume yet another battle in an epic rivalry.

Behind them the experienced Polyanskiy looked to have found the form that carried him to series podiums in the past, leading a small group that included South Africa’s Wian Sullwald, France’s Aurelien Raphael and Luis and Royle. The Russian opened up the lead on the second lap to 20 seconds and did not look back, claiming his first podium since 2012.

In another impressive comeback run performance in Cape Town, Mola and Murray crashed their way back from the chase pack into the top five, claiming fourth and fifth places respectively.

Says Richard Murray: “Wow, this was amazing. It was like the Olympics with the people going crazy! It was hard. I didn’t feel myself today and couldn’t work as hard as I would’ve liked to on the bike. Sorry to the guys. I actually thought my swim was quite good. When I came into transition I saw, to my surprise, there weren’t many bikes left! Mario and I went together on the run and on the second lap he said ‘Let’s go’ and I thought oh no! I’m happy with fifth, but I know that I need to improve. It was something special to race in front of family and friends and I’m looking forward to doing it again next year. This was something spectacular.”