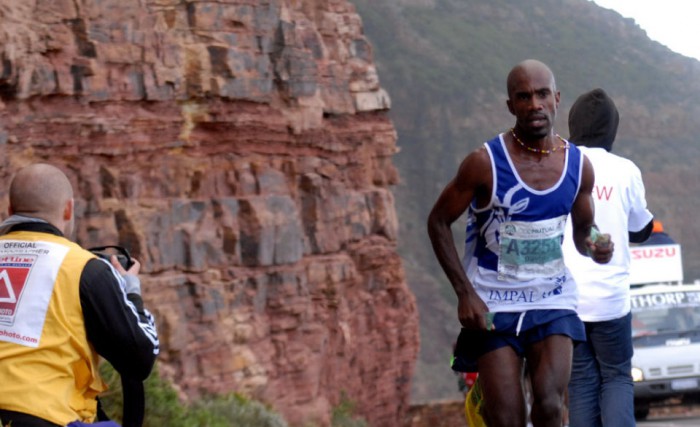 Last year’s Old Mutual Two Oceans Marathon champ David Gatebe is confident going into this month’s race and says he is ready to defend his title after a good build-up. We caught up with him for a chat about his race preparation, and his thoughts on the massive incentive for a new course record in 2014. – BY DONALD MATHIPA & LAUREN VAN DER VYVER

After David’s stellar 3:08:54 win at the 2013 Two Oceans Marathon, he arrived back home in Rustenburg and saw posters of himself all over town. “A lot of my friends started taking me more seriously, because before they thought I was just running for fun!” he says. Now, he’s ready to impress again in 2014, with his training programme for the title defence having started in December. At the recent Old Mutual Om Die Dam 50km last month, David secured fourth place in 3:01:02, having dropped out of the race at the 30km mark last year because of it being just three weeks before Oceans. This time around, he had more time to recover in between the two races, allowing him to go conquer the tough Hartbeespoort course before starting his tapering period ahead of Oceans. “At Om Die Dam, I took it easy and was just looking to improve myself. My intention was never to win there, but focus on preparing for Two Oceans.”

Looking ahead to the Cape classic, David says the financial incentive offered by Old Mutual for a new course record will definitely spur the top runners on to chase fast times. The first man over the line in a time faster than Thompson Magawana’s 3:03:44 of 1988 will pocket a cool R1 Million on top of the R250 000 winner’s purse, and the top women will be chasing Frith van der Merwe’s 3:30:36, set in 1989. Unsurprisingly, the race has attracted a number of top runners from around the world, and David says it will be a very tough battle at the front of the pack.

“The Kenyans and Ethiopians will lead us to a new record this year,” he says, but adds that they may not actually take the incentive money back to north Africa. “They’re very good marathoners, but no one is the master of the ultra. After the 42km mark, everybody will tire and all that matters will be mental endurance.” So for the champ, it’s all about sticking to his own race-day plans. “If I try to run other people’s races, not knowing how they prepared, they will beat me. On the day, I want to start with 3 minute 15 seconds per kay and increase to three minutes after two hours on the road. If we pass the marathon mark in sub-2:15, I’ll go for the record, too!”


In his build-up to Oceans, the Rustenburg-based Impala Running Club athlete averaged 270km per week before his tapering started, with his typical weekly programme focused on speed sessions on track, 3km tempo sessions, one mid-week long run of about 30km and hill repeats on Fridays, while weekends were dedicated to long runs. “I prefer to train in Rustenburg because of the heat and altitude. It definitely helps me at the coast,” he says.

Having learnt the art of long distance running while training in the Vaal with former Two Oceans and Comrades champion Fusi Nhlapo, as well as Moses Rachaka, David says he’s positive about his state of mind going into these big races. However, there is a wary look over the shoulder to some of his competitors. “The Lesotho guys, like former winner of the race Mabothile Lebopo, and my own countryman Moses Mosuhli, are also in it because they do hills like me. Moses is always in the top 10, so he’s not one to overlook.”

With the support of his wife and coach Dave Adams in preparing for the big day, David remains focused on what he has to do. “There’s no pressure – if the opportunity presents itself, I’ll go for it on the day. I just have to concentrate on getting a good result.”

While ultra-marathons are notoriously difficult to predict, and things can go horribly wrong for even the fastest, fittest athletes, we still think these are the other runners to look out for on in this year’s race.

Shadrack Kemboi
(Maxed Elite), Kenya
It will be a first race longer than 50km for the Gauteng and Soweto Marathons champion.

Coolboy Ngamole
(Nedbank), South Africa
The 2012 Olympian is also a former SA Marathon champion, and has the natural speed.

Stephen Dikobo
(Bidvest), South Africa
The 2013 City to City Marathon champion is up to speed, recently closking 31:30 for 10km.

THE WOMEN
Thabitha Tsatsa
(Maxed Elite), Zimbabwe
The defending champion will be looking to improve on her 3:39:54.

Jennifer Koech
(Nedbank), Kenya
After finishing ninth last year, she went on to win the 2013 City to City Marathon.

Nina Podnebesnova
(Nedbank), Russia
She was fifth in 2013 and has the speed to challenge for the win.