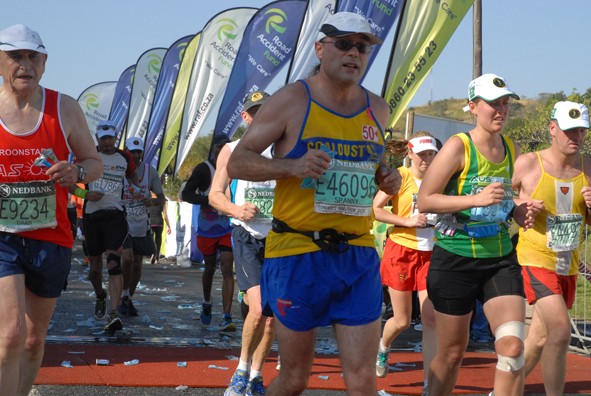 With the clock just having ticked over two hours, Spanny Hidalgo Souto from Witbank crossed the finishline at the Dis-Chem Half Marathon in January. Forty-five minutes later he was on his way to hospital, having had a heart attack inside the medical tent at the finish. He told us that he’s thankful it happened when it did, and that running is proving his saviour. – BY LAUREN VAN DER VYVER

Unsurprisingly, Spanny’s memory of the day is somewhat disjointed. “Having taken the race easy, I felt slightly nauseous at the finish when I crossed with my CoalDust club mate Neels Vermeulen and was waiting for my girlfriend Riekie to finish. I had no chest pains, just felt queasy, but I decided to go to the medical tent anyway, because it wasn’t something I usually encountered,” says Spanny. “They told me to sit down. A day later I woke up, confused, pulling cords out of me when I saw the bruising down my arm.”

He had suffered a heart attack in the medical tent and the doctors stationed there had to defibrillate him – in other words, arrest the heart muscle with electric shocks across the chest – before sending him to hospital, where doctors had to apply two stents to unblock a clogged artery. According to the doctors, it was a genetic disposition to store bad cholesterol that had built up over the years. “I woke up and wondered why and what I could have done to avoid it, but I couldn’t have. I was living at my healthiest. I guess I have a healthy heart, but not enough blood pumping towards it,” says Spanny.

He describes the timing of the heart attack as a blessing in disguise. “It’s a relief it happened when it did, and not 300m before the finish, where I wouldn’t have had time. You never really think of medics at a race, but without them, maybe I wouldn’t be here today…”

RUNNING PLANS
Spanny’s running journey began in late 1999 and to date he has finished 13 Comrades Marathons and 12 Loskop ultras, having only missed 2010’s ‘Big C’ due to a football injury. In other words, he was the picture of health and fitness! “I was running every day, cycling, kayaking, working out at the gym and maintaining my weight. I’m at every time trial at CoalDust in Witbank, also being the Club Treasurer, and I’m always prepared for a race. So everyone was surprised that it happened to me, because of my lifestyle. I thought I was bullet-proof, because I’ve always taken up any challenge.”

He met Riekie three and a half years ago and also introduced her to running. They regularly attend time trials together, and she seconded him on the Comrades route, so she understands the frustration of a runner who can’t run, and is by his side on check-up days. Meanwhile, after years of only taking a multi-vitamin every morning, Spanny now has five different prescribed tablets, and he is slowly finding his feet again. “I started walking again two weeks after the incident, and I’m now doing 5km with my father and at time trials, but I lack energy and it’s frustrating, because I don’t work up a sweat. I’m not sure I’ll ever get to run the big ones again… I wanted to run Comrades with my son and do the Great Wall of China Marathon, but that’s on hold.”

RUNNING THE HERO
The main thing Spanny wants people to realise is that running is not at fault for his heart attack. In fact, it was probably running that prevented the heart attack happening earlier. “I believe that running saved my life, because sport makes you make healthy choices. I wouldn’t be here without it,” he says. “I think I’ll miss running like I did, because it teaches you about yourself. I sort out the world’s problems on the run, and I found that running was my go-to and I always learnt something new. The only thing I can hope for now is a 10-kay one day, and I hope I can just keep improving.”

DOCTOR’S DIAGNOSIS
Dr Jonathan Witt of St John EMS in Bedfordview was on duty at the Dis-Chem finish and tells us about the incident.

“Spanny’s ECG readings were normal at first before showing some warning signs. We had to defibrillate him for two minutes before sending him to hospital. He was definitely an abnormal case, because we usually just get muscle-related cases after races. I’ve been posted at Dis-Chem for eight years now and the advice I can give to runners is that you need to seek medical attention if you’re not feeling like you normally do after a run. If you have chest pain or shortness of breath, then get checked. It will take five minutes of your time and it will allow doctors to react.”