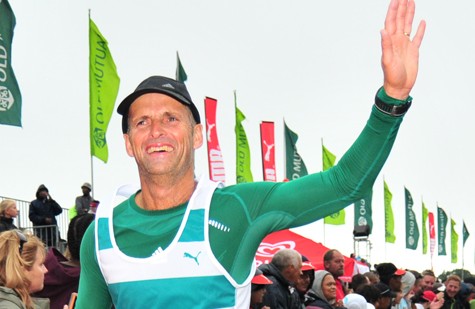 Between 1993 and 2004, cricketer Gary Kirsten played 101 Test Matches and 185 One Day Internationals for South Africa, then launched a successful coaching career that saw him lead India to the World Cup title and SA to the world number one Test team ranking. Now running his own academy while still coaching overseas, he still finds time for a morning run, and the odd ultra. – BY SEAN FALCONER

Finishing the 2012 Old Mutual Two Oceans Marathon in 5:33:31 was the fulfilment of a long-held dream for legendary Proteas opening batsman Gary Kirsten. “Being from Cape Town, I’d always wanted to run the breathtakingly beautiful route,” he says. However, getting to the start line was a real challenge, as he had to run a qualifying marathon while on tour in New Zealand with the SA team, and that meant a very long night…

“We finished the last ODI against New Zealand in Auckland on the Saturday night, around 10:30pm, and literally an hour later three of us jumped in the car to drive four-and-a-half hours to New Plymouth. We slept for one hour when we got there, ran the marathon, then drove back to catch a flight out of Auckland. It was a pretty tiring day, but a great experience, and gave me a healthy respect for that sort of distance. I finished in 3:53, but struggled a bit in the last 5km, so it was a good mental challenge, too.” Much like his cricket career, then, where he had to overcome the combined mental and physical challenge of facing the world’s best bowlers.

CARRYING HIS BAT
Gary wracked up a formidable set of records in his cricketing career. He was the first Protea to play in 100 Test matches, the first Test batsman to make hundreds against each of the other nine Test nations, and his 188 not out against the United Arab Emirates at the 1996 World Cup remains the highest ODI score by a South African and the highest score in World Cup history. He also held the record for the highest Test score by a South African after batting for 14.5 hours against England to make 275 in 1999. That mark was subsequently surpassed by Graeme Smith’s 277 in 2003, but it remains not only the second-highest SA Test score, but also the second-longest innings in Test history.

Unsurprisingly, Gary says he had to be really physically fit to be able to concentrate on batting for such long innings, and therefore has been running for 25 years, but reckons running an ultra is far more challenging than batting through a long innings. “Spending all day in the middle and running a marathon are very different experiences, but running a marathon is definitely a harder physical challenge!”

ALWAYS ON THE RUN
After his playing days came to an end, Gary turned to coaching, and his finest moments came when he led India to the World Cup title on home soil in 2011, followed by coaching South Africa to Number one in the World Test team rankings in 2012. In between all of that, he helped form a company called Performance Zone, focused on working with individuals and teams in business and sport, then established the world class Gary Kirsten Cricket Academy and also became a sought-after guest speaker.

In terms of running, Gary averages about 40km a week, mostly in the suburbs around his home in Cape Town and the nearby Kirstenbosch Gardens, and he says he prefers starting the day with a run. “Except for winter in Cape Town, I prefer to run in the mornings. It’s a great way to start the day, and my advice to people who think they are too busy to go for a run is to make it a priority in your day.” However, his hectic work and travel schedule make it hard to settle into a regular training routine, especially the months when he is overseas in India, coaching the Delhi Daredevils in the Indian Premier League.

“I find running a great way of seeing places I travel to, so my adidas running shoes are the first thing I pack, but when I am coaching in India I run mainly in the gym, because it is difficult to get around on the roads. I find running is a great time to meditate, or think of ideas to outwit rival teams.” Also, Gary’s training philosophy in cricket is easily adapted to his running: “Simple repetition in practice is important to build a strong mechanical base that can withstand the pressure of performance.” That’s what made him such a great batsman, and what is now working for him as a runner.