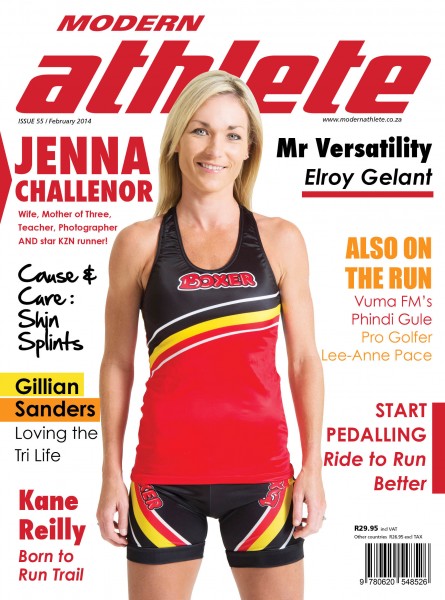 With a very successful year’s running behind her,
Jenna Challenor of Boxer Athletic Club is looking forward to 2014 with great
excitement. Having given birth to her third daughter, Tao, just over 18 months
ago, the multiple KwaZulu-Natal champion at 10km, the half marathon and in
cross-country says she came back stronger than ever, which saw her win both the
Totalsports Ladies 10km in Durban in August and the Spar Ladies 10km in
Pietermaritzburg in September. She also finished third at the SA Half Marathon
Champs in September in East London, clocking a PB 1:16:21, and provisionally
booked her spot in the SA team for the World Half Marathon Champs in Denmark in
March.

“I decided to come back fairly quickly after Tao was
born and didn’t know what to expect, but ended up having a really awesome year.
I went to the Totalsports race unprepared, having been injured for a month
before, but I did alternate training and my world-class physio Wayne Holroyd
held me together, and I ran a time just one second off my PB of 34:58! Then I
won the Spar race, which I also won in 2011, even though I was tired after
three big races leading up to it, including the SA Half Champs. Now I’m waiting
to see if we will go to Denmark. I would love to be in the team and go run at
world class level.”

Jenna ran middle distance at school and also did
lifesaving, being part of the SA team, along with future husband Brett, which
won the Lifesaving World Champs in New Zealand in 1998. She took a break from
running while studying teaching, but got back into it when she began working,
around the same time that she also turned her photography hobby into a business
venture. “I was doing my teaching, my photography, and running, and then my
eldest two daughters, Nicolette and Rylee, arrived. It all got a bit too much
and I had to choose, so I went into photography – it’s a lot more flexible for
my children, and my running. I do miss teaching, and one day will go back to
it, but now I can train, look after my kids, and still do my photography.”

She is a dedicated mother to her active daughters, and
says that Tao’s arrival completed her happiness. “I always wanted three babies,
and had to beg Brett for five years to get my third, but that’s me done now,
the factory is closed!” she laughs. “Now I can really focus on my running and see
where I can go with it. Thankfully, Brett is an incredible husband and father,
and is very supportive of my running – even though he travels a lot for
business, I wouldn’t be able to do so many races if he wasn’t so supportive. I
also need to thank my shoe sponsor Saucony and supplement sponsor 32Gi for
their awesome support!”

When asked what effect her three pregnancies have had
on her running, Jenna smiles as she explains she is now a better runner than
ever. “Some people say you struggle after having children, and I must admit I
did struggle to regain my fitness after my first two, but after my third, I
feel stronger than ever. Maybe it’s because I have to juggle a lot more now,
and be more disciplined and focussed, because I only have one-and-a-half hours
to train at 4:30am. I’m a mom of three and a wife, and I split myself a million
different ways, but I fit it all in. You just have to go out there and do it,
work it round your family and make it part of your life.”

For now Jenna is focussing on distances up to 21km,
and this year she plans to get back into cross country, having run in SA
colours in 2009, but later she plans to step up to the marathon and ultras. “One
day I want to run a good marathon overseas, and having lived in Durban all my
life, the Comrades is in my blood. My mom has run 10 Comrades, and I feel I
have the endurance for it. I actually get stronger the longer the distance, but
Tao is still too young, so I’m not ready for that step up yet. I can’t train
for four hours and then come home to carry a one-year-old on my hip all
afternoon. At this age they’re very hands-on, but once they get to two to
three, it’s a lot less physically demanding. Then watch me go!”