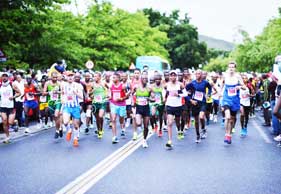 The 36th Winelands was all set to be biggest ever, with
record entries in both the marathon and half marathon, and the organisers were
looking forward to great race, despite not being able to secure a sponsor for
the event. But then the heavens opened the day before the race, and it just
kept raining and raining, resulting in several hundred runners who had
pre-entered not making it to the race. Both the marathon and half marathon had
attracted record numbers of entries, especially following the news that the
marathon route had been changed slightly due to road works and would now be a
bit easier, but the weather and road conditions kept many people away on race
day.

Those that did make it the start soon found themselves running in
absolutely perfect cool conditions, and many a PB was set on the day. In the
marathon, the Dicardo Jakobs (Nedbank)
took the win in 2:26:10, while Candyce Hall (3:03:44) took line honours in her
new Carbineers WP colours. The 21km wins went to Lindikhaya Mthangayi (Itheko)
in 1:07:54 and Kim Laxton (Sunninghill) in a course record 1:19:15.