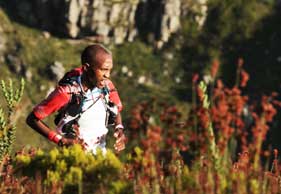 The 35km Jonkershoek Mountain Challenge race in May
2013 showed exactly why Thabang Madiba is now such a respected trail runner in
SA. With 5km to go he was three minutes behind the leaders, but using his natural speed, technique on steep downhills and ability to
pick it up in the latter part of a race, he chased down trail star AJ
Calitz, Ian Don-Wauchope and Michael Bailey to grab gold in 2:59:56. With it came the title of SA Long
Distance Trail Running Champion, and a spot in the SA team for the World Long
Distance Trail Running Champs in Poland.

“I’ve become a technical runner and I love
taking the hills with speed,” says Thabang, “I’ve found the downhills the best
thing when I need to catch up in the last few kays of a race. I also remember
taking on AJ at the Red Bull LionHeart in November as well, where I was lying
third for a while but managed to close the gap and then pull about a minute
ahead of the third man, but AJ still just took the title.”

Given the success that the man from
Ga-Rankuwa has enjoyed on the trails, it’s hard to believe that he only did his
first trail race in 2009, with little knowledge of the technicality of the
sport. “I was always an athlete, and I remember being quite good in the 1500m
in high school, but I started mainly on the road,” says Thabang. “But at home
there was a small mountain I could run on and I enjoyed it so much. Now I am driven
by the uniqueness of the trails I race. It’s great to get into it – you get to
view nature for free and there is always something new. Every trail is
different and that’s why it keeps me motivated!”

In the last few years, Thabang’s talent on
the bike as well as his feet gave him the opportunity to represent SA at the
ITU Duathlon World Champs in Spain in 2011, where he placed 21st
overall. But it was after joining forces with coach Nico Sterk early in 2012
that Thabang showed he was destined for great things on the trails. He collected
wins at Hedianga Ridge, the Cradle Mayhem, Diamond Dash V and the Roodepoort
Ramble events, and also finished third in the Old Mutual Two Oceans Trail Run. In
2013 he secured another third place at the Two Oceans Trail Race, won in
Jonkershoek and also grabbed eighth at the Otter Trail Marathon.

“I always had my running, but it wasn’t
until I met my coach that things came my way. Nico showed me a little more
control in training and right now I’m training two hours a day each in the
mornings and afternoons, while cycling in-between for fitness and doing long
rides of three hours on the weekends,” says Thabang, who also does sessions on
the track to work on his speed. “I needed a programme I could follow properly,
and I’ve definitely grown from that. Now I’m used to six days of intensity a
week.”

Thabang says the thing he is most thankful
for is the support he gets from family, friends and Nico. “It’s been hard,
because I have a three-year-old son, so there needs to be a balance always, but
my family supports my running, and I also have an amazing neighbour who drives
me to races, while the community always has a good word to say.” Fatherhood is
never far from Thabang’s mind, and after a hard training session he goes
straight home to play with his son. “It’s about commitment for me,” he says, “I
manage to do it all and make sure I support my family as well.”

He also says he finds it encouraging to
see how quickly trail running is growing in this country. A few years back, he
saw very little competition for the elites, but now there are athletes putting
their stamp on races all over. “In the last three years it’s changed a lot! Now
there’s more competition out there, which is great motivation for me!” And so,
looking ahead to 2014, Thabang will be chasing more wins: “I want to go back to
the Two Oceans Trail Run because for me it beats any race for scenery and the
atmosphere from the crowd. There are also the XTERRA competitions in the coming
months, and qualifying for the XTERRA World Champs. That’s my ultimate goal!”