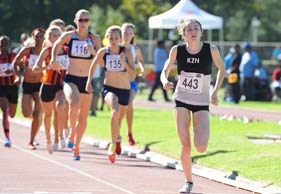 One of the
highlights of the three-day SA Sub-Youth, Youth, Junior and Under 23 Champs came
on the third and final day when Tiaan Smit broke the SA record in the junior
men’s 110m hurdles. He crossed the line in 13.51 seconds, breaking Tshepo Lefete’s
two-year-old record of 13.71. Thando Roto claimed the junior men’s 100m title
in 10.53, running the fastest time in the country this year, while Phillipa van
der Merwe won the SA title in the junior women’s 100m race in 11.89. Meanwhile,
Justine Palframan and Sonja van der Merwe enjoyed a ding-dong battle in both
the 200m and 400m events for under-23s, with Justine taking the shorter title
and Sonja being awarded the 400m title on a photo finish 53.32, having only
begun training again late last year after a long injury lay-off.

In the middle
distances, five athletes really stood out. In the 1500m for sub-youth men, Thabile Mkupheli led two others
under the old SA record with his 4:06.81, while Carina Viljoen ran an excellent
9:57.06 in the 3000m for youth girls. Meanwhile, three athletes won two victories
each: Rantso Mokopane took the 1500m and 3000m steeplechase for juniors, Tshegofatso
Setlhakgoe the 1500m and 3000m for sub-youths, and undoubtedly one of the stars
of the meet, Gena Lofstrand won both the junior 800m (beating last year’s
stand-out athlete Monique Stander) and 1500m.

BACK TO THE BOSCH

With the very
successful juniors out of the way, all eyes turned to Stellenbosch for the 106th
SA Senior Champs, and it was terrific to see the stadium so full and the
athletes dishing up such exciting athletics, but what stood out was the number
of younger athletes stepping up to the podium, proving that the future of track
and field in SA is bright. So, while Chris Harmse collected an incredible 18th
consecutive national title in the men’s hammer-throw and Sunette Viljoen won
her ninth title in the women’s javelin, the sensation of the meet was once
again Gena Lofstrand. She led from the gun to win the women’s 800m in a PB
2:04.60, the second-fastest time by a junior in the world this year. Other
youngster to shine included 20-year-old Wayde van Niekerk in the men’s 400m,
winning in 45.99, while junior Anel Oosthuizen set a new junior SA record as
she won the 20km race walk.

In the
men’s 100m, Simon Magakwe won a fifth straight title, then also added another
200m title as well.

Other highlights
included SA Half Marathon champ and recent Old Mutual Two Oceans Half Marathon
winner Stephen Mokoka claiming his fifth consecutive 10 000m title, in the
second-fastest time in the world thus far this year, 28:22.30, and then ‘doubling’
with a first 5000m title as well, in the fastest time run in the world this
year (13:25.94). Only Xolile Yawa has won the 10 000m title more times
(nine) than Stephen. Another double winner was Mapaseka Makhanya, winning both the women’s 1500m and
5000m titles, and setting a PB of 15:53.61 in the longer race. One of the best
races of the meet was the men’s 1500m, where Johan Cronje outkicked Juan van
Deventer in the home straight to win in 3:38.13 and retain his title.

By the end of the two-day meet, long jumpers Lynique
Prinsloo (women) and Zarck Visser (men), as well as men’s 400m hurdlers Cornel
Fredericks (winning his third SA title) and PC Beneke, had all recorded
A-qualifying standards for the IAAF World Championships in in August. World Champs javelin bronze
medallist Sunette Viljoen and women’s 400m hurdler Annerie Ebersohn had also
put one proverbial foot in the team for by setting B-qualifying
standards. Lynique’s winning jump of 6.81 metres was one of the best performances
of the weekend as she improved her personal best by more than 20 centimetres
and moved to third on the all-time SA list, while Zarck’s 8.29m moved him to second
in the men’s all-time SA list.

The surprise of the meet was undoubtedly the return to
competition of former world high jump champion and still SA record holder,
Jacques Freitag (31), who finished second behind Ruan Claasen on countback
after both jumped 2.10m. Jacques said he had very little time to prepare for
the Champs, but vowed to soon be one of the best in the world again.