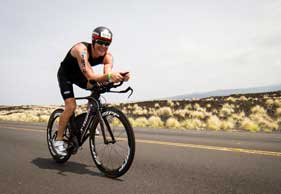 With five full Ironman SA medals to
his name, as well as another four from around the world, plus 11 half Ironmans,
Kyle Buckingham says he can’t wait to show what he can do on the pro triathlon
circuit in 2014, but he is also keeping his feet on the ground. “January’s 70.3
in South Africa will be my first race as a pro, but I don’t want to put pressure
on myself, because I want to race and stick to my own plans. It’s very
exciting, though! I’m also getting married in Durban after the Ironman SA in
April, so there’s so much to look forward to – especially the short break from
training after the wedding! I don’t get a lot of those!”

Kyle only took up triathlon at the
age of 25, having never participated in endurance sports. “I surfed a lot
growing up in Port Elizabeth, but that never flourished professionally. Then when
I moved to London to work as an electrician, I got into triathlon. I had watched
Raynard at the 2008 Ironman South Africa, and when my housemate started
triathlon training, I thought why not?”

So Kyle bought a bike and began his
triathlon journey, but he had to contend with cold weather on top of long
working hours. “I started by training four to five hours inside my flat, mostly
on my treadmill and bike. Being in the UK was hard because the weather was
really cold, dark and snowy. Also, I’d only start training in the evenings from
about 6 o’clock, after eight hours of manual labour, but I knew that I wanted
to pursue it!”

Thanks to natural talent, he made
good progress, and so in 2009 he took on his first full Ironman in SA and
finished 66th overall in 10:29. A year later he improved his time on
local soil to 9:24 after starting a training programme with SA Ironman legend Raynard
Tissink. Kyle then went back to Europe to compete in several Half Ironmans, and
in 2011 he was back, chasing a top-10 finish at Ironman SA. Unfortunately, that
race didn’t go to plan, largely due to flat tyres on the bike leg, but he
bounced back in 2012 to finish 13th (one position in front of Raynard). His
next outing at Las Vegas 70.3 saw him bail due to illness, but a month later he
grabbed seventh in his age-group in Kona after taking a month off work to live
and train in Hawaii’s hot, humid conditions.

Having moved back to SA at the end of
2012, Kyle entered his first 70.3 in South Africa and says things just clicked
for him. Always a competitor on the hills, he put everything into his bike leg
before running to a seventh overall finish, and first South African, in 4:17. He
also broke his age-group course record by 12 minutes and was the first amateur home
in a strong field! He then focused on fitting in six sessions each per week of
running, cycling and swimming, while also working on core strength in the gym,
to prepare for Ironman SA, and he did his fine-tuning by finishing ninth
overall in the Abu Dhabi International Triathlon.

Then it was back to PE for Ironman
SA, and in Kyle’s own words, “Everything went according to plan, despite a hard
last 4km on the run where I had to remind myself how much I wanted a good
finish,” He came home in an amazing seventh overall, the first South African
and first amateur over the line, and qualified for Kona in his age group, and
Hawaii would prove to be yet another highlight on his journey to turning pro.

Unsurprisingly, Kyle’s choice of
favourite event is not hard to guess. “I put down Ironman South African as my
favourite, because of the crowd support and vibe,” he says. “My family, my
sister and brother as well as my fianc? Lauren also make a plan to be there, so
it’s very special for me. Doing so well in 2013 was a great feeling and having
the family and Raynard at the finish was even better. I went from that to Kona
with a new confidence! Now I want to push on in 2014.”