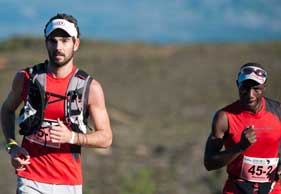 This is going to be a ‘consolidation year’ for 21-year-old
trail star Kane Reilly. He did well on the SA trail running circuit in 2013 and
was selected for the SA Team for the World Mountain Running Champs in Poland
last August, but the Stellenbosch University B.Comm student says his studies
suffered as a result, and his three-year degree has become a four-year plan as
a result. “My main priority this year is to finish my degree. I’ve only got a
few subjects to finish up, but I want to get them done, and that’s why I have
only picked three target races for 2014 to focus on.” This will see Kane lining
up for the ProNutro AfricanX Trailrun in March, teamed up with his good friend
and World Champs teammate, Thabang Madiba, followed by the SA Long Distance
Trail Champs at the Outeniqua Traverse in June and the Otter African Trail Run
in September. “I enjoyed the 2013 Otter and felt I was close to getting it
right, so this year I want to put into practice what I learnt last year.”

Kane took up running at school at Bishops in Cape Town,
but says he only got serious about it in Grade 11. “I did well in the southern
suburbs schools scene, but when I ventured into the club cross country races, I
was being smoked by some of the club runners. So I came out to Stellenbosch in
2009 and started working with Jacques van Rensburg, and within a year I was running
in the same Western Province team as those guys.” That improvement also allowed
Kane to chase down his first big running goal, to break the school’s 3000m
record, and in Matric he shattered the old mark of 9:02 with a stunning 8:45!

Since then, he has enjoyed much success, but there
have also been some disappointments, like finishing fourth in the Jonkershoek
Mountain Challenge Marathon in Stellenbosch last May. The event served as the
SA Mountain Running Champs and the top three men and women would be selected
for the World Champs in Poland, so Kane gave it everything and with just 5km to
go was in the lead. “In my mind I had already won it… I was not celebrating
yet, but I was getting a bit emotional, because that feeling of being an SA
Champ is a phenomenal feeling! But it all changed in the last kilometres, and I
was very disappointed to only get fourth, because it’s every athlete’s dream to
represent your country.”

So when he was offered an extra slot in the team if he
could cover his own expenses, he jumped at the chance, and then AJ Calitz had
to withdraw from the team anyway, so he was in… but in Poland things just
didn’t work out for Kane as he finished 307th. “I was over-trained,
had a few niggles going into the race, and I was taking life far too seriously.
Then on race day I also suffered stomach problems, but I’m not going to blame
that for my poor performance… I reckon my head just wasn’t in the right space.
Still, I figure that if I can get through 42 kays in that state, I can get
through any race!”

Looking ahead, Kane says that if he qualifies for the
2014 World Champs at Pikes Peak in Colorado, USA, he is not yet sure if he will
be able to go. “I’m not completely ruling it out, but I would need to go train
in the Drakensberg, then head to the US to acclimatise, so I will have to see
how my studies go first.” Even if he doesn’t get there, Kane has a long-term
vision for his running, starting with turning professional straight after he
completes his degree. “A lot of older guys have told me to take the opportunity
while I can, before I need to start working, because it’s an opportunity that a
lot of people never get. Thankfully my parents support me fully in this, as do
my sponsors, Salomon and GU.”

For now, however, he is just focusing on not making
the same mistakes as 2013. “Last year I learnt that burning out can happen
easily if you’re not careful. I went through a stage of being overly
competitive, but now I am running for the love of doing it, not just to be on
the podium,. I know that if I’m enjoying all aspects of my life, then the
podiums will come. That’s my New Year’s Resolution, I suppose.”