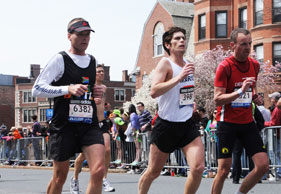 Having
just recently run the Two Oceans and then facing 20 hours of flying to get to
Boston, Chris and I knew that we weren’t going to be in tip-top form, so we
decided to soak up the experience and have the time of our lives. We got to
Boston on 12 April, did some sightseeing and commented a few times about what a
safe and beautiful place it was… The registration and Expo were unbelievable
and we were like two kids in a candy store. We also took a bus tour of the
route, and I must say that their much-feared “Heartbreak Hill” has nothing on
our Chappies or Fields Hill!

Race
day arrived on Monday 15 April, Patriots’ Day in the USA, but also known as
Marathon Monday in Boston. Our day began with an early bus trip from Boston to
the start, where we waited for three hours in the athletes’ village and
marveled again at the safety and security as Americans packed their phones and
wallets in their post-race, pick-up tog bags. Being from South Africa, we
didn’t even consider this – and arrived in black plastic bin bags!

I
was just 500m from the finish line when a barrier was suddenly placed across
the road to prevent runners going through. I had heard a loud bang just before,
but there was a lot of noise from the crowd, so it didn’t register that anything
was wrong. I just thought maybe they were allowing traffic through for some
reason. Minutes later an official announced that there had been an explosion
and that we should wait until further announcements as to how we could finish.

We
stood there for about 45 minutes and runners were using their phones to call
loved ones waiting for them. Many were worried about people waiting at the
finish. I quelled my own anxiety by trying to reassure others – I also think
that living in South Africa sadly creates resilience, as most of us have been
touched directly by violence. I was nevertheless very worried about Chris. He
should have finished about an hour before and the plan was that he would wait
for me at our hotel about 1.5km from the finish. I just hoped that he had not
decided to wait at the finish after all.

In
the meantime the people of Boston gave us water, food and plastic bags to keep
warm. One very kind woman just gave me the coat off her back! Eventually the race
was abandoned and we were directed to leave the course, so I made my way on
foot back to our hotel. It was the longest walk of my life, as I still had no
idea about Chris. In the meantime, he was in the hotel, oblivious to what had
happened, until he turned on the TV. He reckons it was the longest few hours of
his life as he waited for news of me!

Not
finishing was extremely disappointing, but this was far outweighed by the joy
of knowing that we were both safe. Events like this make you take stock and
redefine what is important. We are both still shocked and sad,
but we are determined to return to Boston and show that a small number of
cowards can’t defeat the spirit of the runners and the good people of Boston.