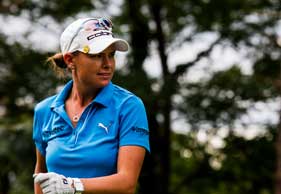 In 2013, Lee-Anne took honours at the Turkish Airlines Ladies Open,
Madrid’s Open de Espana and the Sanya Ladies Open in China. The humble athlete
from Wellington in the Boland was also voted the Player’s Player of the Year by
her fellow professionals, while back home her efforts were also recognised with
a nomination for Sportswoman of the Year at the South African Sports Awards.
She finished the year in 53rd place on the world rankings list and
second on the Order of Merit money list for the year, and attributes her
success to the great support she receives. “It’s about focus and the continuous
support from my coach and family that made my season. Support in South Africa
is growing, so hopefully ladies will take to the sport more!”

Lee-Anne remembers playing caddy for her dad on
weekends for extra pocket money while growing up, learning the game along the
way. “I hit some balls when everyone finished playing and someone mentioned to
my dad that I had a natural talent. I never looked back!” She continued to play
when she moved to the USA to study psychology at the University of Tulsa in Oklahoma, and then decided to give it a go as a golfer
after a successful start to her career at amateur collegiate level.

She turned pro in 2005 and qualified for the Ladies
Professional Golf Association (LPGA) Tour in 2007, but it wasn’t an easy journey
in the beginning for SA’s number one. “It was a tough start, for sure. Travelling
was hard on me,” she says. “Eventually I had to get used to the lifestyle,
competing with the best and making some friends. I lost my qualifying card at
the end of 2007, but worked hard to qualify for the Ladies’ European Tour in
2008.”

Lee-Anne’s breakthrough came two years later with wins
at the Deutsche Bank Ladies Swiss Open, the S4C Wales Ladies Championship of
Europe, the Finnair Masters, the Sanya Ladies Open and the Suzhou Taihu Ladies
Open, putting her at the top of the money-earner list that year. “I had a new
coach and one back at home who strived to give me positive feedback,” she says.
“My training was intense in the off-season and I remained fit to concentrate on
my game. Still, it took a lot of patience to get there.”

For a pro golfer, adequate endurance and strength work
(especially on one’s core) is necessary to be fit enough for top level golf. “I
spend five to six hours on the course a round, so it’s important to stay fit,”
says Lee-Anne, who does her peak fitness training in her off-season months. “It
gets difficult to train all-out on tour, travelling between tournaments, so you
have to have racked up your fitness levels pre-season, as you can fit in minimal
sessions during the season.”

Having played hockey when she was younger, Lee-Anne says
she has developed weak knees, and thus keeps her cardio to short bursts of 45
minutes each session. She uses running, swimming and time on the elliptical trainer in the gym to work on her endurance,
while also doing light weights and cross-fit to work on her core. “A strong
core for a golfer is ideal, because it helps with our swing when we twist our body
playing the shot,” she says. “Strong stomach muscles, hips, legs and back help
with the strength and technicality of your game.” Endurance work also helps
Lee-Anne maintain full concentration through long, pressurised rounds on the tour,
and she is extra careful about nutrition as well. “I make sure I’m disciplined by
cutting down a lot of sugars, especially during a round. I grab nuts and
biltong to keep me going, and that keeps me fuller for longer. It’s hard to
keep healthy on tour, but your game is better when you do.”

Lee-Anne recently moved back to the Boland and is now based at Pearl Valley
Golf Estate, where she loves coming back to a good ol’ South African braai with
family and friends. This year, she is eyeing the majors, having already
qualified for four out of the five. “I want to remain on form and stay
focused,” she says. “Golf is about fun, patience and practising the right thing. Everything from your
attitude and short game will benefit!”