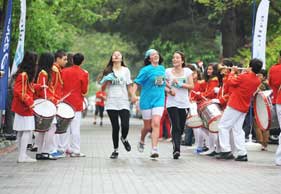 We arrived in Iznik on an overcast Saturday afternoon,
reeking of the scented hand-cleaner that Turkish minibus crews dispense to all
passengers. We had not planned to run here – we only learnt of the race after
making our travel arrangements – but for runners who travel, costly changes to
flights and hotel bookings are a small price to pay to race through one of the
world’s most historic towns. Iznik was originally known as Nicea, and was
renamed when it was captured by the Muslim Seljuks in 1075. As Nicea, Iznik was
an important centre of the Christian Byzantine Empire, and was described as the
third Holy City of Christendom. Iznik was also the capital of the young Ottoman
Empire, and produced the world’s most coveted ceramics during the 16th
and 17th centuries.

And so we arrived as participants in the two-day
festival of running comprising four events, three starting together: The 130km
Iznik Ultra run around the beautiful lake, the 80km Orhangazi Ultra halfway around the lake, and the tough 42km Mountain
Marathon, which climbs over a thousand metres. For lesser runners like me,
there is a 10km run through the town, held the following day.

Early the next morning, I headed to the town centre
where the longer events start and finish. Only the four race helpers were there
to watch as a lone runner emerged from the dawn mist. A smile flitted briefly
over her weathered face as she crossed the finish line, then she disappeared…
a most understated ending for someone who had just spent 23 hours running 130km.
But then this was Bakiye Duran, Turkey’s female ultra pioneer, whose recently
published biography is aptly entitled Courage
is Solitary.

Later, Debbie and I wandered up to the start of the 10km,
the town centre was thumping and a joyfully raucous marching band threaded
through the milling spectators. It came to a halt behind the field of nearly
300 runners from 17 nations waiting to begin. Above the buzzing din, a chanted
countdown began, indicating the seconds: “iki…
bir… sıfır!”… and the stampede began! We started near the back, as we
always do, and Debbie soon allowed me to drift ahead. A woman looking like an
advert from a running magazine gear section kept pace in my vicinity, and she
glanced so frequently at the large contraption on her wrist that she failed to
notice the huge banner warning of the steps leading down past the 14th
century Green Mosque. Narrowly averting
disaster and recovering her stride with great aplomb, she consulted her wrist
contraption less frequently as we ran past the Iznik Archaeological Museum.

In the side streets, local farmers waited patiently
astride their muddy tractors for the runners to pass. I suspect they were
enjoying the distinctly un-Turkish spectacle of semi-naked people running in
public. Cutting through the town walls at the Yenisehir Gate, a short stretch
of gravel road brought us to the lakefront road leading to the turnaround near
the halfway mark. We passed the palace of Constantine the Great, where the Nicene Creed, core of the most widely
shared Christian orthodoxy, was drawn up in 325 AD, and when I swung round the
turn, I saw Debbie was not too far behind, looking good (as always).

We headed back down the lakefront, took a final left
turn past the deserted gardens of the Talya Caf?, and cruised comfortably up a
gentle tree-lined incline to the finish in the centre of town. The marching
band formed a guard of honour for the runners and
the crowd completed the carnival atmosphere. Although the band greeted all female
finishers with heightened gusto, Debbie received a particularly ear-shattering
welcome. Only later did we understand the reason for this: She had finished
first in her age category.

At noon we joined the fun of the marvellously
colourful prize-giving, including a stirring performance of sword and shield
dancing. Back at our hotel the manager was standing at the front door. “Number
One!” he said, greeting Debbie with a cheerful smile. Later, at the restaurant
opposite the Aya Sophia, the waiter looked at her… “Number One!” he beamed,
throwing in free cups of Turkish coffee. When we checked out the next morning,
a warm sun was lifting the morning mist. We’ll have to come back, I thought, as
the taxi went over a bump in the road, and, next to me, Number One’s medals
jingled softly in her bag.

The event is held in late April, an ideal time to
visit Turkey, and Iznik is easily reached from Istanbul by ferry, across the
Sea of Marmara. Go to www.iznikultra.com for more info.