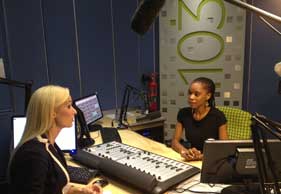 Just like being behind the mic, running is a habit
that will always follow Phindi. “I remember finishing my first Comrades and I
had lost three toenails. I said I’ll never go back, but I was on the road again
two weeks later! I think the thing about running is that you absorb the environment
and connect with runners,” she says. So it’s a little like radio then…

Initially, being on air wasn’t on the cards for
Phindi. After school, she studied chemical engineering in Cape Town before
working for SAA as an analyst programmer. “Then I discovered radio and called
Metro FM. I got the job and started reading the news,” says Phindi, who knew
that this was her calling, despite still being at SAA. “I went through training
and Voice of Soweto then asked me to host a show from nine to 12 in the
evenings.” However, Phindi chose to stick to SAA, which provided more security,
but fate had its way when YFM came calling. “I became part of the new station’s
original crew,” she says, “I was there for five years before moving to East
Coast Radio in 2003.”

For six months, Phindi flew from Jo’burg to Durban to
host weekend shows before she got a weekday slot and made the permanent move to
the coast. She spent five years at East Coast, then took a year off to form her
own marketing company, but it wasn’t long before radio came calling again and
Phindi was asked to host the 9am to midday show on Gagasi FM. After another
successful five-year stint, newly-formed Vuma 103 FM approached the radio veteran
to become station manager at the end of 2012. “After two years, Vuma has gained
120 000 listeners and my goal is to take it to 1 million in 2015,” she says. “We
started from scratch and we look out for the community. We’re committed to give
local presenters a shot and we inspire on air.”

As much as Vuma FM keeps Phindi busy, overseeing the news,
the sales teams as well as the presenters, keeping active is another top
priority. “I was never into running – I was a yoga and Pilates girl! I was
lucky enough to grow up in a household where eating healthy and exercising was
important, but my running was all due to my husband Kevin.” In 2012, having run
four Comrades Marathons, he dared Phindi to take it on herself after she been
his race-day supporter through the years. “After going to races, giving Kevin
water or food and seeing him afterwards, I figured I should join,” she says, “and
one day after going on a run, he dared me to take on the Big One.”

“I had about eight months to get to the start in
Pietermaritzburg, and while some said ‘go for it,’ others thought I was crazy!
Luckily, Kevin helped me through and I progressed from 10km to 21km to my first
marathon in Soweto, my hometown.” In her debut Comrades, Phindi says she was
humbled by the togetherness, getting to the finish in 11 hours 59 minutes and 3
seconds. “Comrades runners have a common goal: To get to the finish! It doesn’t
matter if you’re a CEO or a security guard, it is touching that every runner
helps those in need. I was near the Hilton Hotel and I remember hearing that we
have four minutes till the cut-off. I made it and felt like I could do
anything!”

Phindi is already setting her sights on this year’s
Comrades and running for the PinkDrive, dedicating early mornings for a run
before work. “I also spend some evenings running with the New Balance team, as
I’m a brand ambassador, and Kevin joins me. We’re also in for this year’s
Brighton Marathon and my goal is to run one international marathon a year.” In
between her running, Kevin, who is a chef by profession, also makes sure they
eat healthily.

She is also involved in the Comrades Marathon Women
Seminars and being a race ambassador means it’s important that she shares her
story, encouraging other women to run, especially first-timers, and sending out
the message that Comrades can be
done. “I guess I’ll rest when my heart stops beating!” she laughs. “People make
excuses. Do yourself a favour and set a goal for yourself instead of trying to please
others.”