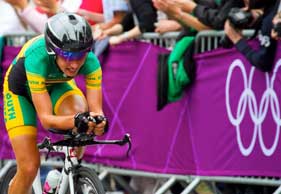 There was a time when Ashleigh dreamed of making it
big in triathlon and duathlon, and with a 1:21 PB for the half marathon, she
was enjoying her road running too, but then she picked up ITB problems and put running
on the backburner, concentrating on cycling instead. A few years later she is
country’s only pro female professional rider on the European circuit, and led
the SA women’s cycling team in the 2012 Olympics… but she hasn’t given up on
running just yet.

“I showed a lot of potential to be good endurance
runner, but my development from hockey player and part-time runner, to hardcore
runner went really fast, and I think I developed a muscle imbalance. I probably
pushed too fast at the time, going straight to 21km instead of sticking to 10km
at first,” says Ashleigh. “I’ve learnt through cycling that I need recovery
periods and regular massage in order to remain injury-free, and the bonus of
cycling is that there is less impact on my joints and muscles. Also, core work
and gym work are essential. But I want to explore running again some day – I’ve
always had a dream to run Comrades.”

Born in Pretoria and schooled in Bloemfontein,
Ashleigh went on to study chemical engineering at the University of
Stellenbosch, where she met her triathlete husband, Carl, who now coaches her. “Carl introduced me to a life of competitive
endurance sports and today I find myself travelling the world together with my
husband and best friend, competing on the world stage. We live half the year in
Riebeek-Kasteel, about 80km north of Cape Town, and the other half in Varese,
Italy, constantly chasing summer days and good weather!”

Ashleigh began racing
competitively in 2008, and once she finished her studies in 2009, turned pro in
2010. She recently joined the Hi-Tec Products team in Europe, having been racing
for the Lotto-Belisol team, and she rides for Biogen Toyota in South Africa.
Her list of honours now includes numerous podium finishes in Europe, and she
has also enjoyed much success in SA: “I’ve won a fair number of races here, including
most of the big ones – the Argus, 94.7,
Amashova, OFM and EP Herald,” says Ashleigh, who has also done well at both SA
and African Champs in recent years.

In 2009 she was second in the SA Road Race Champs, in
2011 she was African champ in the road race and runner-up in the time trial,
and in 2012 she added the SA national title in the road race and was second in
the time trial, followed by identical results in the African Champs. In 2013
she claimed both SA titles, and says she wears the SA colours on her racing kit
with pride: “Winning the SA Champs title means a lot to me, and riding in your
national championship jersey makes you stand out in races, which has its benefits.”

Ashleigh’s success on the road saw her selected for
the 2012 Olympic Games in London, where she was SA’s top performer, finishing
16th in the women’s road race and 24th in the time trial.
“London was a hard experience, to be honest. I went into the Games with high
hopes, but underestimated the mental aspect, and don’t think I was properly
prepared. The crowd was massive, and conditions on the day were really tough, with
torrential rain, but most importantly, I had to ride alone in the road race as
our team was not experienced enough to ride together at that level. So I was initially
disappointed with my result, but looking back now I am satisfied with 16th.
It gives me a realistic idea of what I need to do to prepare for Rio 2016, and
I have made plans to get the right support structures in place.”

Thanks to her UCI points from European races, Ashleigh
also represented SA at the World Champs in Italy last year, but again found it
tough due to being the only SA rider and having no team support. “In 2012 we had
six SA girls racing in Europe, but in 2013 it was only me, so we need more
build-up ahead of Rio. There are a lot of youngsters pushing through now, but I
am still preparing myself for the possibility that I could be alone again in
Rio. My focus now is on Europe – I will be selective about racing locally –
because if you have aspirations to go to the Olympics or World Champs, you need
to race the best in Europe.”