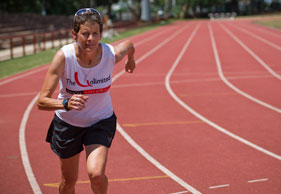 The last
30km of Comrades 2012 was no fun for Zola Budd Pieterse. At the marathon mark her mind went blank
when she realised she had already run a marathon but was not even halfway yet!
And from the 60km mark she was in pain and found it hard to believe that there
were still some 30km left of this race that thousands choose to run each year!
Zola did finish, alongside running friend and mentor, Bruce Fordyce, and
although she swore to herself many times during the race that she would never
run it again, she crossed the finish line knowing she would be back. “I
finished the race and told myself I could do better!”

Now Zola is
back to tackle Comrades 2013, but is humble in her expectations and says she
just wants to finish. “That is my first goal. If I feel OK at the 60km mark I
will try to run faster than last year. And that will be great! I would be very
grateful for a silver medal, but it is not the main aim.”

At the
recent Old Mutual Two Oceans Half Marathon, Zola crossed the line in a
respectable 1:24 and says she was pleased with the result, especially
considering she only arrived in SA the week before and then worked three full
days at the expo. Her training for Oceans was all Comrades-based, which meant
she was not sharp or race fit, just covering the distance, she says. “I would
love to run the Oceans Half again and see if I can run faster than this year! I
would also like to do the ultra, maybe in three years when I am 50. I can’t
wait for my new age group.”

LIFE IN THE USA

Zola, her
husband and their three teenagers have been based in the USA for the last five
years. They initially moved to Myrtle Beach so Zola could compete on the
Masters Athletics circuit. “Now the kids are in high school and we don’t want
them to change schools again. It will depend on their education when we move
back to South Africa,” says Zola. She visits South Africa four times a year as
promoter of Newton Running Shoes. “I miss South Africa a lot, especially our
running community. And I really miss running with friends and in Bloemfontein
on the farm roads.”

Zola still
tackles her beloved cross-country races in the USA and loves racing 5km
distances. “There are loads of 5km races over there. My favourite was the Foot
Locker cross-country race last year. I won my age group in 17:30,” says Zola,
who in 1983 clocked 8:39.00 for 3 000m before breaking the 5 000m world record
in 1984. She represented Great Britain at the Los Angeles Olympics and went on
also win two World Cross-Country Champs titles.

Zola admits
that she never thought she would be tackling the 90km between Durban and Pietermaritzburg,
let alone running it a second time. “Comrades challenges your normal day-to-day
existence and it makes you feel part of something bigger. I think all Comrades
runners have to be a bit crazy, because you have to rationalise why you are
doing it, and craziness is the closest or best answer I can find.”

This year
she is definitely in better shape physically, having done more long runs and
track workouts, and also emotionally. “I think the most important factor in Comrades
is how fresh and injury-free you can get to the start. You need to look forward
to running it and not dread it.” She adds that she still turns to Bruce for
training advice, but with all the travelling she does it has been difficult for
her to follow a set programme. “I have a general guideline and then apply it to
my day-to-day circumstances.” The former barefoot starlet also hopes the Up Run
will suit her better than the Down Run. “I have never liked running down hill. If
you are tired going down hill you can’t really walk, but uphill it is easy to
walk!”

She is not
sure that she will be running Comrades every year, but she would like to do it
again when she turns 50. “I think people run Comrades because it adds meaning
to their lives. You are not just a runner, but a Comrades runner. It is a
challenge on a physical level, but even more on an emotional and spiritual
level.  It also makes you part of
something bigger than yourself, and bigger than just a race.” She is also considering
tackling a Half Ironman race this year in the USA and Ironman next year. “I
believe you have to keep challenging yourself!”