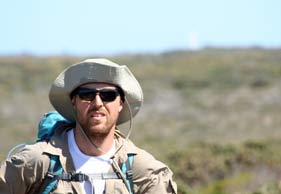 Over the years there have been other
expeditions that have set out to navigate the length of the Orange River. There
have been plastic kayaks, racing kayaks and even a swimming relay that took on
the river for a couple of days at a time. A major river in South Africa, the
Orange regularly welcomes kayaks and rafts on commercially-operated sections, but
to navigate the length of the river, in the water, by river board, and to do it
alone? Ray is embarking on an adventurous first, titled ‘The Plastics SA Nampak Rigid Plastics Orange River Project.’

River boarding is an in-the-water
discipline where the athlete lies on a buoyant board to travel down a river. This
isn’t an ordinary boogie-board, though. Ray’s specialised river craft is moulded
from hard plastic by the Parys-based kayak design and manufacturing company,
Fluid. This river board, called a Fluid Anvil, has Ray positioned so that his
forearms, elbows and chest rest on the board while his feet – wearing fins –
kick for propulsion and steering.

The river board offers limited
protection from rocky collisions in rapids, which is why a full-face helmet and
knee pads are crucial. Although Ray will portage the Gariep and Van Der Kloof
Dam walls and the major waterfalls at Augrabies Falls, Twin Falls and Richie
Falls, the rest of the time he’ll be in the water moving through rapids and
flat-water sections alike on the river board.

Ray’s journey started on 6 April from
the Mnweni Valley in the Central Drakensberg. For the first 80km, the river is
impossible to navigate, but Ray kept to his source-to-sea objective by carrying
the river board from the start. He’s also carrying a waterproof backpack loaded
with clothing, first aid supplies, food, camping equipment and river boarding
gear. On top of this, he has to strap on his river board and helmet. The river
board alone weighs in at a little under 10 kilograms, so he set off with about 40kg
on his back.

A hiking trail took Ray into the valley
and to the top of the Mnweni Pass and into Lesotho. Here, at 3 000m above sea
level, lies the source of the Orange River, an open expanse of marsh and small
streams that first join to become the Senqu River, then later the Orange River.
Hiking parallel to the stream, it took him a week to cover the 80km to the
first main settlement, the village of Mokhotlong in Lesotho, where he restocked
his food supplies and then got into the river for the first time.

Ray’s biggest concerns are infection,
skin conditions and drowning. He’ll be in the water during daylight hours –
that’s a good 10 hours a day – and along much of the 2 300km distance, the
water quality is questionable. “Each day I’ll spend an hour out of the water at
lunchtime to dry out and at the end of the day I’ve got antiseptic soap to
scrub down. I’ll have one day a week not in the water to thoroughly dry my skin
and disinfect,” Ray explains.

Ray has been training for months on the
Palmiet, Molenaars, Dwars and Liesbeek rivers in , at both high and low volume. “Thanks
to the patience and generosity of members of the Cape White Water Club, I had
an incredibly steep learning curve last year,” he says. He also trained at Wadi
Adventure, a white water park in Abu Dhabi, to hone his skills in swift-moving
water.

Ironically, Ray’s specialised river board
is plastic and it was this same material that sparked the idea for this
expedition. “During my time on the Dwars River last year, high up near the
watershed, I was horrified by the amount of plastic waste in the water and
hanging from vegetation on the riverbank after flooding. Litter and waste from
people starts off on land, ends up in rivers and is pushed into the sea,” he
says. “I became very ill from this trip as a result of the water pollution.”

The water samples that Ray will take
every 100km along the river during his trip will be analysed for pathogens and
contaminants. On his rest days, he will lead clean-up activities, encouraging
the participation of children and adults from communities along the river.