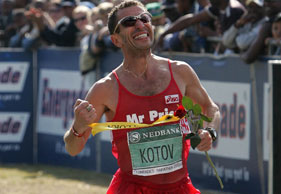 In 2000 the
unheralded Belarus Vladimir Kotov, aged 42, took the South African
ultra-marathon scene by storm as he claimed second in the Old Mutual Two Oceans
Marathon, then won the Comrades Marathon in a course record 5:25:33. Back then
he did not speak a word of English, but he fell in love with this country and
its races, and after a few years of regular visits, he eventually made the move
permanent. Today Vladimir lives in Cape Town, where he manages his Kotov Sport
running store in Century City. He still runs competitively, usually winning the
master (50-59) age category in races from 10km to Comrades and beating many a
younger runner – and he now speaks fluent English, even if his Eastern European
accent is still very prominent!

’s record in the two
premier SA ultras is incredible: 12 medals at Comrades, with 7 gold medals that
included three wins, two thirds and a fourth position finish, and 10 medals at
Two Oceans, including three golds – and that all in his 40s and 50s! In 2010,
his first year in the master category, he not only set a Two Oceans course
record in his age group, but also set a world record for 50km along the way.
Which should come as no surprise, given his marathon pedigree: He finished
fourth in the Olympic Marathon in 1980, won several international marathons,
and has a PB of 2:10:58!

Incredibly,
even at 55, Vladimir reckons he has another Comrades top 10 performance left in
him before he bows out of elite racing. “I am getting older and slowing down,
but this year I have still been training 200 to 210km per week, and if I can run
5:48 again, same as last year, I think it will be enough for a top 10.” He also
wants to go after the master’s marathon world record of 2:19:29, which was set
by South African Titus Mamabola in 1991. “I was in good shape for the New York
Marathon last year, but then the race was cancelled because of the weather.”

While still
pounding out the mileage, Vladimir says he has been putting more emphasis on
his post-running career for the past few years. “I think I have one or two more
years at the top, and then I will focus more on my business. I have been
running for 46 years and I understand shoes and training advice, so I can help people.
My shop has been going for nearly four years, and each month the business gets
better and better. My dream is to open a shop in Johannesburg as well, because
I am well known in Joburg, and there are a lot of people who run up there.”

These days,
he still regularly runs 22km from home in Melkbosstrand to work and back again
in the evening, with an eight-hour work day sandwiched between runs. He also regularly
swims at the gym, but says fitting in elite-level training is now very hard. “I
don’t have a tough job, but I still have to be in the shop all day. If you run
professionally, it’s not possible to also have a full-time work career. But I
still think of myself as young, and that I can compete with top runners. And maybe
I will go after the grandmaster records in a few years. Never say never!”