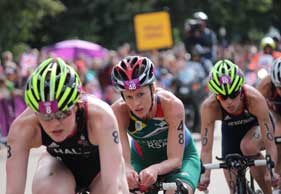 Ask Gill about about 2013 and she answers quite
frankly: “I’m not one for excuses, but I did not realise how much 2012 and the
lead up to the Olympics took out of me. There were still some good results –
African Champ, European Cup podium, top 10 in Yokohama – however, I expected so
much more of myself,” says Gill. “I do take great heart, or maybe relief, in
scrolling through the London 2012 results and noticing that it was not just me
who failed to make an impact on the circuit last year. I think people
underestimate how much an Olympic year takes out of you and the difficulty in
coming back the following year from such a high. However, it has made me hungry
again. While I felt deflated at the end of last season, I feel ‘uber-motivated’
now! I can’t wait for the 2014 season and to express my full potential.”

Gill (32) grew up in Pietemaritzburg and soon proved a
gifted runner and swimmer, in keeping with the family trend. Her father,
Kenneth Curr, had run the marathon for SA in the SA Games in the 1970s, then gone
on to ultra-marathons and competed at numerous World Triathlon Championships,
while her mother Margaret earned SA colours for the 100m, 200m and 400m. Older
sister Rowena was also a talented triathlete, so it was no surprise that Gill
also got into multi-sport at the tender age of nine, and when she was just 13,
she finished fifth in the 13-15 age group at the 1995 World Tri Champs in
Mexico, going on to represent her country many more times.

After school, Gill moved to Stellenbosch University for
five years to study law, and while there she met her future husband, Mark, a
cricketer at the time and also originally from KZN. Having completed her
studies, she moved back to Pietermaritzburg and subsequently became the youngest
female lawyer to appear in the High Court in South Africa. Then the opportunity
arose to go work in London, and it was here that Gill found herself racing on
the elite ITU circuit. However, balancing a demanding legal career with tri
training and competition was proving too much, so at the end of 2010 she
decided to put her legal career on hold in order to turn pro.

The move paid off handsomely when Gill was selected to
represent SA in London, and she says the Olympics have definitely been the
highlight of her career thus far. “I finished 19th out of 55 girls,
and I was really pleased with that, as I had only been racing for 18 months as
a full-time athlete.” Looking ahead, she says the long-term goal is getting to
the Rio 2016 Games, but for now she is building up to the Commonwealth Games in
August while also focusing on getting more great results on the ITU circuit.

“I’ll be 34 come the next Olympics, so I’ll probably
have to think of packing it in after that, but I might as well make the most of
it while I can! When I do retire, I have the option to return to law, but I
think I’d like to give back to the sport a bit before I do that, somehow get
involved in triathlon to help other athletes, and see where that goes.”

Gill is also considering a switch back to road running
once she retires from triathlon. “I haven’t run many flat road races for a
while, but I’m capable of a low 34 for 10 kays off the bike, so I’d like to
think I can run a low 33 straight. I love running, it’s my favourite discipline
of the three, and I think that’s where I will end up. But for now I get to do
what I love, which is swimming, cycling and running, competing in triathlons at
the highest level while travelling to the most awesome cities all over the
world. I’ve got this short window, just a couple of years in my life to do it,
and I’m just loving it.”