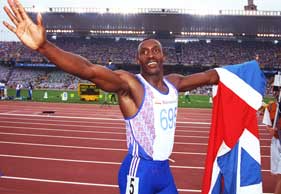 In 1993, Linford became the first man
to hold the Olympic, World, Commonwealth and European 100m titles at the same
time, and in 1994, the Jamaican-born sprinter successfully defended his
European and Commonwealth titles to extend his reign as the world’s dominant
sprinter to a second year. He had also won gold in the 60m and 200m at the
European Indoor Champs in earlier years, and the only major championship gold to
elude him was the World Indoor Champs, where he had to settle for two silvers. He
was the first European to break the 10-second barrier and still holds the
British record of 9.87s, he formerly held the world indoor record over 200m, he
was the oldest Olympic 100m champ aged 32 when he won in Barcelona, and he
finished his career with 24 major championship medals, including 10 golds, making
him one of the world’s most decorated athletes of all time.

LET
ME ENTERTAIN YOU

Today, aged 53, Linford remains a
popular figure in athletic circles all over the world and is often seen signing
autographs or posing for photos with fans. Naturally, he is often asked about
his career, and says he looks back fondly on his competitive years. “I enjoyed
many highlights in my career, made terrific friends and visited incredible
places, and I loved what I did for a living. And the more you enjoy what you
do, the harder you work and the better you do.”

He adds that he was driven by
competition and his ambition to always be the best. “If you believe that
anybody else is better than you, then go do something else. That’s why I never
walked onto the track in the correct following order for the lane draws. I was
already overtaking the other guys, to show them I was faster, and ready to take
them on. They must have thought Linford is mad, but that was just part of who I
am. Athletes are entertainers, like actors on a stage, and I always wanted to
put on a good show for the audience, but what I really loved was when they
played the national anthem for me. I lived for that.”

Unfortunately, Linford was competing
in an age rife with drug-use, and he had close shaves with positive testing for
banned substances at the 1988 Olympics and the 1994 European Champs, but
escaped sanction. However, in 1999, having all but retired and just running
occasional invitational meets, he tested positive for the performance enhancing
drug nandrolone at an indoor meet in Germany and was given a two-year ban by
the IAAF, even though UK Athletics controversially ruled that there was
reasonable doubt whether the drug had been taken deliberately. Christie continues
to deny any wrongdoing. “If I took drugs there had to be a reason to take
drugs… I had pretty much retired from the sport by then!”

This did not mean the end of Linford’s
athletic career, however, as he turned his hand to coaching, and he helped
Katharine Merry to win bronze in the women’s 400m in the 2000 Olympics, and
Darren Campbell won gold in the 4x100m in 2004 and silver in the 200m in 2000.
Darren also added golds at the Commonwealth Games and European Champs, for a
final haul of 12 major champs medals.

Linford’s take on coaching is very
much like his personality, laid back on the surface and deeply intense if you
delve deeper. “You’ve got to love training, or you won’t make it in athletics,”
he says. “I trained on Christmas and other holidays, no matter what the weather
was doing, and I remember once doing 800m intervals in the snow. It was so
cold, I curled up on the track and went to sleep until the next rep! And I
believed that opponents must suffer to make up for my suffering in training,
and I think that gave me an advantage over them.”

“Today I use 90% of what I did with my
coach, because he had athletes winning medals in all the major championships,
and I believe if it aint broke, don’t fix it! I’ve never done any coaching
courses, but my athletes are running personal bests and medalling, and I
believe that tried and tested methods work best. Some may not agree with me,
but it worked for me, and is working for my athletes. I also use the same
motivational talk my coach used on me: The quicker you finish, the quicker you
can go home!”