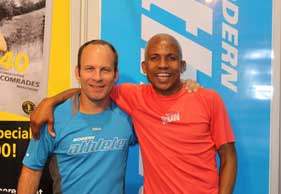 The crowd in Durban couldn’t believe their eyes, nor could
the millions watching on TV. Charl Mattheus had just won the Comrades in
5:28:37 and the top 20 men were in, now everybody was waiting for the leading
woman, Ann Trason of America, who was about two minutes away from her second
win, when suddenly a man in a colourful full-length lycra costume, complete
with head-dress and facial make-up, came flying in to finish. Now running a
sub-6:00 Comrades is considered such an achievement that the Comrades Marathon
Association even gives runners a special medal nowadays – and here was Percy
Dunn doing it in a fancy dress costume!

“That 1997 run was flawless. When I finished, I felt I
could start again!” says Percy. “The previous year had been a real slog, even
though I ran 6:19, but 1997 was a breeze, despite the fact that I was still
doing interviews the night before, even lying in a puddle of water for a
photograph! Then right before the start, I realised I had no pacing chart, so I
just started my watch and never looked at it again. My support crew was
supposed to meet me at intervals along the route, to look after me and touch up
my make-up, but I ran so fast that I kept missing them by five to 10 minutes. I
was just running so comfortably and the people along the route loved the suit. I
believe it was divine intervention, because none of my other times ever beat
that 5:56.”

Percy (52) grew up in rural KwaZulu-Natal and worked
in construction after school, then for local government in Durban until he was
head-hunted by the Foreign Ministry in 1991. From 1996 to 2010 he served as a
diplomat in Egypt, Saudi Arabia and Jordan, and now works as a
Johannesburg-based consultant in the petro-chemical industry. At school, he was
a top sprinter, then turned to middle distances, and won nearly every race.
However, he was also a talented soccer player, representing KZN at schoolboy
level, then played competitive amateur soccer for 11 years after school, and it
was while playing for Stella FC in Durban that Percy got back into running.

“Two of my team mates, Noel Parsonage and Craig
Banfield, ran the Comrades on just their soccer fitness and a little extra
running, finishing in about 10 hours and nine hours respectively, and neither missed
any soccer training or matches, so I took on the challenge. I was clueless,
though, so I approached Arthur Fredericks, then a six-time finisher, for help,
and we trained together daily. I owe that man a tremendous debt of gratitude,
as he guided me through my first two Comrades in 1989 and 1990. The guys at the
club were shocked by my 6:38 and 6:31 times, but they didn’t know about my
training with Arthur – I was even doing long runs on Saturday mornings, then
playing a full game in the afternoon!”

After 1990, Arthur sent Percy to train with coach
Bobby McGee’s training group, with top young athletes like Darren De Reuck and
Colleen Lindeque, and Percy soon began showing real improvement. For the next
five years he focused on shorter distances, going on to run a 31-minute 10km
and a 2:21 marathon, and he says that laid the foundation for his 1997 Comrades
heroics.

“In early 1997, I was approached by the head of HR at Beacon
Sweets, Rod Le Roux, to run the Comrades for them to raise awareness for the
Nelson Mandela Children’s Fund. It was only after I said yes that they told me
about the suit. In fact, Rod got his PA to break the news to me!” laughs Percy.
“I thought these people are clueless – you don’t run Comrades in a suit! Turns
out they tried to get Bruce Fordyce to run in it the year before and he turned
them down, although he still ran next to Darrel De Wet who wore the suit, but I
got them to send the suit to me in Cairo and after I made some modifications, I
decided to give it a go.”

“Strangely, it never crossed my mind to stroll the
thing in 11 hours, but with hindsight, the charity got far more exposure thanks
to my fast time. It’s fantastic that people still remember the suit and my
time, but I want them to also remember that it was done to raise awareness for the
Nelson Mandela Children’s Fund, so I am really glad it can get some more
publicity now, as we celebrate the life of the great man himself.”