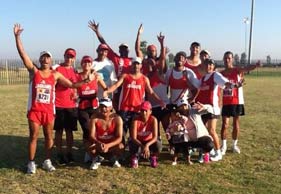 “We are the oldest ‘non-white’ running club in the area and are rich in history,” says Jaguars Club
Secretary Esme Moodien, who explains that back in the 80s the club was
classified as a black club in the old . “While we were
reaching 100 or more members back then, a lot of members broke away through the
years to form other clubs in the Jo’burg region, one of those being the Pegasus
Athletic Club.”

Esme, a three-time Comrades Marathon finisher herself, has
close ties to the Jaguars, as her father, Palmer Lawrence, was one of the
founding members. “It was very simple: People saw my father running and they
were inspired, and the club came to be,” says Esme. “My father had 19 Comrades
Marathons under his belt and now the club is full of members who have run
between 10 and 20 Comrades!”

The club celebrated its 30th anniversary this
year, including the hosting of its first Jaguars Palmer Lawrence Memorial Half
Marathon in April to serve to commemorate Esme’s father’s contribution, and to
get the community involved. “We’ve had a lot of club runs that have attracted
new members over the last few months,” says Esme, “and we definitely have quite
a mixed bag of members, too! Our newest member is in her late fifties and is
looking at her first Comrades next year, while we also have a family with
teenagers who have joined.”

Running in their trademark red and white colours, the
Jaguars are looking to grow their presence in the area. With numerous 5km and
8km fun runs each year, there has been a huge interest from youngsters getting
into the sport, and the club is targeting more fundraising and social events to
bring in still more new faces. They’ve already scooped up Zimbabwean-born Kevin
Murira, who came 11th at the recent Slow-Mag 50km.

For the Jaguars, the sport is one for family, friends and
getting kids involved. “My own brother, sister and daughter get involved with
the club, so it’s a close community,” says Esme. “What we want to do is get
kids running, and promote a healthy lifestyle so they can stay away from
mischief.” For Ennerdale and Jozi, the Jaguars are not only a road running club,
but encourage cross-country and walking, too. “We cater to everyone,” says
Esme, “whether shorter distances or those looking to do lots of races with us
for mileage for bigger ultras.”

Jaguars meet for time trials every Thursday at 6:30pm in the
summer months and 6pm in the winter months, and they hold monthly meetings for
new members to join.