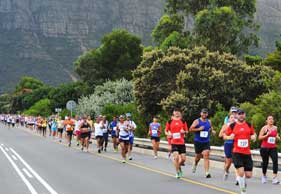 When
the Dutch established a colony in Table Bay in 1652, in what we now know as
Cape Town, they required timber for building and for ship repairs, but there
was no large forest in the immediate vicinity of the settlement. After
exploring the area further, they found a wetter valley on the other side of the
mountain, with a plentiful supply of trees. This area became known as Hout Bay,
or Wood Bay. The only problem was that Hout Bay could only be reached via one
of three mountain passes, meaning it was hard work to get the timber…

Today
there are three roads leading into Hout Bay – Chapman’s Peak Drive, Constania
Nek Drive and Suikerbossie Drive, and all three feature prominently in long
distance running or cycling events, a fitting throw-back to those intrepid settlers
of the 17th century. The road from Camps Bay to Hout Bay, via Llandudno,
goes through the pass between Judas Peak (part of the Twelve Apostles) and
Little Lion’s Head. This pass is called ‘Suikerbossie,’ and is most famous for
being the toughest hill on the world’s biggest timed cycling event, the Cape
Argus Pick n Pay Cycle Tour. It also features prominently in the Ocean Basket
Bay to Bay 30km & 15km road running event.

This year saw the 38th running of the Bay
to Bay, and the men’s title went to Gauteng-based former capetonian Anthony
Godongwana (Transnet) in 1:40:20, with
Dicardo Jakobs (Nedbank) second in 1:41:13 and Wanda Roro (Itheko) third in 1:41:47.
In the women’s race, another former capetonian (and Anthony’s partner), Thozama
April of Transnet, scored a convincing victory by more than seven minutes,
coming home in 2:03:01. Second was Fortunate Chidzivo (Itheko/Zimbabwe) in
2:10:52, with Bulelwa Simae (Nedbank) third in 2:12:13. The winning times were
a bit slower than the previous year due to a headwind in the second half of the
race.

In past years the 30km had
been accompanied by a 2x15km relay on the same route, but this was replaced by
a point-to-point 15km race in 2014, starting in Hout Bay. The inaugural men’s
title went to Sityhilo Diko of Nedbank in 51:02, while Zintle Xiniwe (Maxed
Elite) won the women’s race in 1:03:30.

Simply
SMS the word Bay2Bay and your name
to 33110 and you could soon be
taking yourself and your family or friends to your nearest Ocean Basket
restaurant for a delicious meal.

T’s & C’s: Each SMS charged at R1.50, no limit on
number of entries per person. The publisher’s decision is final and no
correspondence will be entered into. Competition open from 1 February to 28
February.