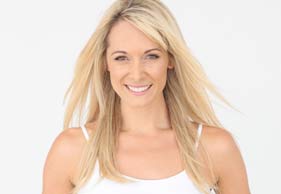 Vanessa’s competitive edge was challenged
when she was invited to run the Otter African Trail Marathon in 2011. She had always
wanted to hike the Otter Trail, so she jumped at the chance. “I had never run a
marathon before, only a half marathon, so I trained very hard and luckily had a
great coach… The ‘Sandman’ himself!” says Vanessa. “I cannot describe how much
I enjoyed the race. It was so tough, but it’s the most beautiful trail I have
ever run on, and 7:08 seemed like a very long time to me, but apparently it was
a great time.” And not many people can say they grabbed a 12th
position in their very first marathon.

In Vanessa’s earlier years she says
she was painfully shy and a very awkward teenager. Her mother thought modelling
and finishing school would help Vanessa gain confidence, and by the age of 22
she had become a beauty queen, strutting her stuff at Sun City as a Miss South
Africa finalist. Thereafter, her modelling and acting career took off and she
travelled all over the world for work. “It was a very exciting time in my life.
I’ve always loved entertaining and it’s in my blood. I feel most comfortable in
front of the camera,” says Vanessa. “However, the film and television industry
is also a very difficult one, as the work comes and goes, and sometimes it can
be a little soul-destroying, as I’m sure all actors will agree with me. So I
wanted to be involved with something more positive and something I had more
control over. I believe what I put in, I will get out.”

That is why Vanessa chose to pursue
her sporting life as well in recent years. Growing up in Mpumulanga had a great
influence on her love for the outdoors and for sport, and she began to realise
that without sport, her life would be empty. Vanessa adds that Ryan was a major
catalyst to this “more serious” approach to sport. “I’m happy to say that I am
now a semi-professional mountain biker! Every facet of what I do is highly
rewarding. In this day and age, sport is more than likely the only thing that
unites people from all backgrounds. It knows no colour or creed, it promotes
health and wellbeing, it changes people’s lives for the good. Being outdoors
and active is my ‘church.’ It’s where I connect with our Maker, and I clear my
mind and revive my soul,” says Vanessa.

Vanessa recently participated in her
second ABSA Cape Epic mountain biking event alongside riding partner and TV
personality Dr Michael Moll. Their team name was The Doc-Ness Monsters and
Vanessa became widely known as ‘Epic-Ness.’ She completed the eight-day Epic in
2012, uncertain of what she had gotten herself into, but crossed the finish
line in good shape. This year she knew what to expect and made sure she was
even fitter than before, but on stage five she suffered an acute asthma attack
and was hospitalised when she got to the end of the stage. After being in ICU,
Vanessa got back on her bike the next day and completed the rest of the race.

“The Cape Epic is ALWAYS tough and
it can throw anything at you!” says Vanessa, who reckons she gets through tough
races by switching off from the pain and removing thoughts of failure. “I don’t
have a quit button, so not completing a race or training session is not an
option. There are varying levels of suffering that require different methods of
mind-control, though, so when things aren’t too bad I like to think happy
thoughts, like lying in a hammock on a tropical island, or repeating mantras to
myself about strength and resilience.” Vanessa also admits to having two pairs
of ‘lucky earrings’ that she likes to ride with, and she did the Epic with a
charm bracelet, one of the charms being an eye. “It’s the eye of God and He
watches over me. I’ll probably never run or ride without it again!”

Vanessa met Ryan at the Knysna
Oyster Festival via a mutual friend. “We have been together since that day, so
it probably was love at first sight!” She admits that Ryan has had a great
influence on her sporting career. “I have never met a human being who is as
focused and dedicated to his career. I cannot describe how hard he trains and
how much he puts into what he does. This has motivated me in every sphere of my
life and his passion for life and sport has influenced me greatly.”

She likes to support Ryan at his
races and says that she cries buckets of proud tears when he crosses the finish
line. They also recently teamed up for the four-leg Terra Firma race in the
Totalsports Challenge and were placed fourth in the mixed teams category. “We
are very supportive of each other personally and in our careers. We communicate
about everything and share our thoughts and fears when doing so.”

The Trans-Alps Challenge is still on
Vanessa’s bucket list, as well as the joBerg2C and Sani2C, but her priority for
now is to complete the Cape Epic in 2014 and thus gain membership to the
exclusive Amabubesi Club. The name means ‘pack of lions’ in Zulu, and you can
only belong to this club once you have completed the Epic three times. She is
also an avid golfer and enjoys water skiing, and add, “I wouldn’t mind giving
snowboarding a proper go, but there’s one problem: No snow in SA!”

Vanessa says sport has taught her
patience, tenacity and immense mental strength. “In sport, I live by Albert
Einstein’s quote: ‘Only those who attempt the absurd can achieve the
impossible.’”

?
Commit
to a sport or event.

?
Employ
a good coach under the recommendation of a friend or fellow athlete, and stick
to what he or she says – don’t cut corners!

?
Find
a good training partner or group, because it’s safer to train with someone and
the company is also great. Identify a mentor within that group or someone you
look up to and inspires you.

?
A
healthy balanced diet is essential when you’re training hard. You should try to
balance carbs, protein and fat, whether you’re training or not. You have to eat
before a training session or race, because your body needs the sustenance. Try
eat an hour or two before, though, as you don’t want a heavy tummy sensation
when exercising.

?
It’s
also important to find a supplement range that works for you.