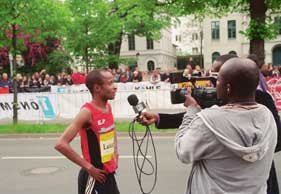 As Lusapho April crossed the finish line of
the 2013 ING New York City Marathon, he threw his head back with a grimace of
pain and exhaustion, hands clasped on his forehead as he fought to get more air
into his lungs. He had just run 2:09:45 to finish third in one of the world’s
biggest races, despite suffering cramps in the last few kays, and he had done
it in the company of some of the world’s best marathoners, including defending
champion Geoffrey Mutai, London Marathon champion Tsegaye Kebede, Olympic and World
Champion Stephen Kiprotich, and 2012 Boston Marathon winner Wesley Korir.

Even though he had won the Hannover Marathon
in Germany earlier in 2013 in a PB and course record 2:08:32 – his second win
here after also winning in 2011 – Lusapho was only considered an outside bet for
the podium in New York, but he ran with the lead group right from the start,
hitting halfway in 1:05:07 and finishing behind Mutai (2:08:24) and Kebede
(2:09:16) in difficult running conditions. His third place was the highest
placing by a South African in any of the big city World Marathon Majors since
Hendrick Ramaala finished third in in 2007.

Third in capped what can be
considered Lusapho’s breakthrough year, not only in terms of race results, but
also for his career, although the softly-spoken 31-year-old from the is just
taking it all in his stride in his unassuming way. “The year started on a high.
I came to
for the Two Oceans Half and I got a sponsorship from adidas. That boosted my
confidence and I was feeling like a professional runner for the first time,” he
says. “Then I headed off to ,
where I won the Hannover Marathon in a PB 2:08 and course record. That opened
the door for me to go run in
– we contacted the person who deals with elite athletes and he was keen and
said I can come.”

Lusapho
is now very much on the international marathoning radar, and his next big race
will be the oldest and most prestigious of the big city races, the Boston
Marathon in April. “I want to be the first South
African male to dip under 2:06, but now my focus is on trying to win the big
city races. I’ve got nine more years left in my legs to do well in marathons,
and with the approach my coach and I are using, we’re not going to change
anything, we’re going to stick to what works for me.”

Lusapho has been coached by Karen Zimmerman
since 2001 and they have developed a very strong bond. “We’ve got a good relationship and I think we make a good combination. We
don’t worry about the competition, we just think about doing better for us. But
she’s never happy – even when I win, she always says I can run even faster!”
says Lusapho with a naughty little laugh. Karen responds with a motherly nudge,
then says, “He’s a dream to train, never complains about what he has to do. He’s
very injury-prone, though, and we’ve learnt over the years what to do, to
change certain things, so he doesn’t get injured.”

Lusapho started running in primary school and was soon selected for the under-13 cross-country team.
Two years later he started training with Karen and joined her Atalanta
Athletics Club training group in . She later became head coach at the
University of Fort Hare, where Lusapho enrolled for a B.A. in Human Movement
Studies, but he did not finish the course due to his running career taking off.
He became a multiple Eastern Province and Border champion at junior and senior
levels in track, road and cross-country, was South African Junior Half Marathon
champion in 1997, has won multiple national SASSU student champs titles, has
medalled at the SA Junior and Senior Track & Field and Half Marathon
Champs, and was crowned SA Marathon Champ in 2011. Lusapho also holds the SA
record for 25km.

He has also represented in numerous international competitions,
including the 2012 Olympic Marathon – he finished 43rd after falling
mid-race – as well as the World Cross Country Champs, World Road Running Champs
and World Student Games, where he was often the top-placed South African. Now
he is working towards selection for the SA team for the World Half Marathon
Champs in ,
later this year, but his big goal is the 2016 Olympics in ,
where he hopes to emulate Josiah Thugwane’s gold medal-winning effort from the
1996 Atlanta Games. “I wanted to try for the Olympic Marathon in 2008, but I
tore my Achilles tendon in training. If I can just stay healthy and
injury-free, then the medal is definitely on in .
That’s the dream. I know what I’m capable of and I believe in what we’re doing,
my coach and I.”

It is his
patience and dedication, along with Karen’s guidance and astute management,
that are now paying dividends in Lusapho’s career. He has resisted the lure of
the high-paying ultra-marathons that dominate the SA road running scene, and
only does a select number of races per year, whereas most of his peers are
either racing everything in order to make some money, or moving up to the
ultra’s at a young age and losing much of their natural speed in the process. “Soon as my international marathon career is done, I will stop running
and spend more time with my family. I have no plans yet for when I am finished
with running, but I hope to make enough money to start my own business.”