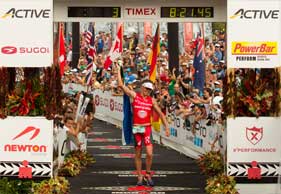 Having finished second in Ironman Austria and sixth in
Ironman SA in 2009, James Cunnama qualified for the Ironman World Champs in
Kona for the first time, but he knew he was not experienced enough to race hard
in Hawaii. Instead he treated it as a recce and test his strengths on the course.
“It turns out I was weak everywhere! So I promised myself I wouldn’t go back
until I was properly prepared.” After a few near misses, he returned in 2013
and finished fourth, the highest ever placing by a South African in Kona.
However, his great showing caught the media totally unaware, despite the fact
that he set only the 19th ever sub-8:00 Ironman time when he won the
Challenge Roth in 2012.

“I was barely on the media radar, despite my sub-eight
and winning a few races in the lead-up to Kona. I was the lowest qualifier, but
I had planned it that way, by cherry-picking races and doing just enough to get
in – the top 50 in the world get selected, but the World Champ goes
automatically, so I knew 51st place was enough. I was considered a
dark horse, because I had not raced well in Kona before.” Well, after a solid
swim and leading the bike leg for a while, James overcame stomach cramps late
in the run leg to overtake two runners in the last few kays to clinch fourth in
8:21:46. “It’s
a little frustrating being one off the podium, but just four years ago I got
absolutely annihilated, finishing 82nd behind most of the girls, so I think I
proved something to myself!”

Born in Pietermaritzburg to parents
who regularly competed in the Comrades and Dusi, James was waking early for
training runs from a young age, often running with his mother’s ‘Pukers’
training group, and at 16 he was regularly wining the junior category in local
races up to the half marathon distance. In 2002 he moved to Port Elizabeth to
study Human Movement Science, and at the same time turned his attention to
middle-distance track in order to improve his speed over all distances. Then in
2004 James worked as a race volunteer at the first Spec-Savers Half Ironman, which
allowed him to drive around the route and get a great perspective of the race.

The
following year the full Ironman came to town and the triathlon bug bit still
deeper. James did his first Ironman SA in 2007, finishing 21st, and
the following year he finished 10th and sixth in the Ironman 70.3
SA, then took a chance and wrote what he describes as a cocky e-mail to Team TBB-Tri-Cozumel, telling them he planned to win the
Ironman World Champs someday. “Six hours later I got an
invite to their Philippines training camp, so I scraped together a few pennies
and went. I did enough to earn a small contract for 2009, which meant I could
live the dream and turn fulltime pro.” That year he was sixth at Ironman SA and
second at Ironman Austria, and since then he has featured regularly on the
podium at Ironman SA and Ironman 70.3 SA, as well as various Ironman events and
other triathlons around the world.

These days James
lives half the year in Stellenbosch and spends the rest of the year between
Europe and the USA. He is one half of the unofficial fastest triathlon couple
in the world with Brit Jody Swallow, a 2004 Olympian and current Ironman 70.3
World Champion. They have been together for two years and travel and race
together as much as possible. “We train at different speeds and intensities, so
often train separately – she actually trains harder than me – but we do about
50% of our races together,” says James. “It would be ideal to travel the world together, like a permanent
honeymoon, but we both treat events as our job, and we cherry-pick our races to
get the best results and maximum WTC points. As hard as it is being apart, we
have a pretty good set-up and see a lot of each other.”

Unsurprisingly, given his terrific fourth place at
Kona, James is now focused on winning the Ironman World Championship title, and
he reckons he has a good chance of claiming that coveted title. “I think 15 of
the last 16 winners finished in the top four the year before they won it… but most
previous winners have been at least 34, so at 30 I’m not putting too much
pressure on myself yet. I learnt a lot at Kona this year and know what I need to
work on. But I feel I can win it.”