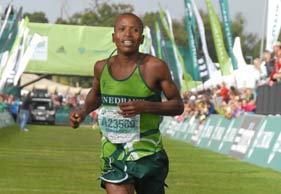 Mthandazo Qhina and Joel
Mmone will both remember the 2013 Old mutual Two Oceans with bittersweet
memories. Mthandazo thought he had won the ultra, as he never saw the front
runner, but then found he had in fact finished second, while Joel started his
sprint too early in the half marathon after mistaking the wrong banner for the
finish line.

When eventual ultra winner David
Gatebe broke away after 32km, Coolboy Ngamole followed. Mthandazo was in the
chasing pack that managed to catch Coolboy, but he did not realise that David
was still out in front! So, at the top of Constantia Nek, David had a lead of
four minutes, but eventually only beat Mthandazo by 1 minute 8 seconds, 3:08:54
to 3:10:02.

Mthandazo says he felt strong
throughout the race – even that Chapman’s Peak and Constantia Nek felt flat! –
and his mentor, Henning Ludeke, adds that his athlete really looked good in the
closing stages. “Mthandazo was substantially stronger over the last 10km, and
if he had realised earlier that their bus was in second place, he might have
caught David.” As it turned out, Mthandazo surged at Kirstenbosch, with four
kays to go, expecting to cross the line in first place. When he realised he was
second, he says he felt a bit confused and disappointed at first, but
considering his achievement, Henning says has been smiling since.

Mthandazo (35) grew up in a rural
area near Qunu in the Eastern Cape. He ran middle distances in primary school,
but his father had him shepherding cows and sheep instead of attending high
school. He left for Cape Town, where he sold snacks on the Cape Metro trains
before finding work in the mines in Jo’burg. However, he became afraid that
working underground might affect his respiratory system and did some casual
work instead.

At this stage (2007) he became
homeless, but Elias Sello, a friend and runner, gave him accommodation.
Mthandazo entered a few races and was immediately hooked, going on to finish his
first marathon in a time of 2:46:47. Since 2008 he has done
most of his training and racing in Cape Town and has won numerous races. His
PBs include 30:01 for 10km and a 6:21 at Comrades. Mthandazo is the current Western
Province half marathon champion and has run four Two Oceans Marathons. He has improved
from a 78th position (3:40) in 2010 to a 6th position (3:11) last year and a
second placing this year.

Henning has played a supportive role
in Mthandazo’s career since November 2011. “He is a very strong-willed character, disciplined and a hard worker, and
had made a lot of natural progress on his own before we met. We are
close friends that share a passion for running. My main role is to find ways of
introducing small but incremental improvements in his training, as well as help
him navigate career decisions. Being part of the Nedbank Green Dream Team has
also helped Mthandazo focus more on his running and less on making a living
from running,” says Henning.

The next big step is Comrades. “As a novice he stood a good chance for a gold medal in
2012. Unfortunately, he cramped up just before Sherwood, where he was then attacked
by a deranged man on the side of the road!” says Henning. “He is currently in
peak shape and we have enough time to recover and prepare properly for a spot
on the podium. His dream is to win Comrades and then race overseas.”

In the half, Joel Mmone believed he
had a chance at a second place, but mistimed his final sprint. “When I realised
it wasn’t the finish line, my legs were done and the actual finish seemed very
far,” he Joel, who crossed the line third in 1:03:45, just five seconds behind
second-placed Lusapho April. Apart from this, Joel says he had a great race,
adding that the pace was relaxed until Lusapho took the lead at the 12km mark.
“After that the pace was hard, 2:55 minutes per kilometre, and at 19km my legs
started tiring.”

Although he was a bit disappointed that
he sprinted too early, Joel is still happy with his performance, and will
continue to stick to the shorter distances under the watchful eye of coach Pio
Mpolokeng. With a half marathon PB of 1:03:05 and a second place finish at last
year’s Two Oceans, Joel is hoping to claim top spot on the podium next year.
“Winning Two Oceans is my big dream,” says Joel, who has
been part of the Nedbank Running Club since the age of 16.