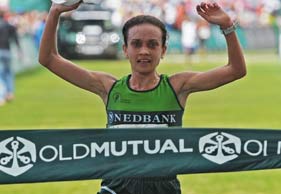 Former SA Marathon Champion David Gatebe beat a highly competitive field
to take the coveted men’s title, crossing the line in 3:08:54. Gatebe, who is a
sporting officer at the Implats Mine in Rustenburg, said the strong winds did
not play a major role in his run. “I decided to pull away from the other runners
after about 34km and managed to keep ahead. It’s a great feeling to win and I
am very happy.” Second place went to local Nedbank runner Mthandazo Qhina (3:10:02),
while Moeketsi Mosuhli (3:10:23) from Lesotho claimed third place.

For the first time since 2007, the Russian twins, Elena and
Olesya Nurgalieva, could not achieve a win. In fact, neither even made the top
three this year, citing flu suffered just three weeks before the race as the reason
for their relatively poor performance, by their normally lofty standards.
Instead it was their countrywoman Natalia Volgina, winner here in 2002, who
came home first in 3:38:38, just over a minute ahead of second-placed Thabita
Tsatsa from .
Third went to an elated and fresh-looking Charne Bosman, the highest-placed
South African, who has won the Two Oceans Half Marathon three times as well as
three SA Marathon titles. She only recently stepped up to ultras and appears to
have found a new niche for herself.

In the half
marathon, both the men’s and women’s winners set new course records, despite
the windy conditions. Stephen Mokoka won the men’s race in a time 1:03:36,
beating two-time defending champion Lusapho April and Joel Mmone in an exciting
sprint finish. In the women’s race, Ethiopian Biru Meseret Mengista stormed to
victory in a time of 1:12:43, shaving more than two minutes off the course
record set last year by Rene Kalmer, who managed to take second place, while
third went to Irvette van Blerk.

The day
before the 2013 Old Mutual Two Oceans Marathon, at the pre-race media briefing,
the big news broke about an upcoming cash incentive to be offered by the race’s
title sponsor, Old Mutual. In 2014, a cash prize of R1 million will be up for
grabs for the winning man and woman if they break the ultra-marathon course
record. Currently, the records belong to the late Thompson Magawana (3:03:44)
and Frith van der Merwe (3:30:36), and these were admittedly set on the old,
supposedly easier course that finished at Brookside inside of up the hill at
UCT, but there are sure to be fireworks in next year’s race as the top men and
women chase after a lucrative payday!

This year’s race featured a number of very familiar faces…

Danny K. and Kabelo: These well-known singers and songwriters are the co-founders of the
SHOUT Foundation that made the Shout
and You’re the Voice music videos
that feature many of SA’s top musicians and public figures speaking out about
social conditions in SA. Kabelo completed the ultra fro the sixth time, while
Danny completed his first half, citing his good friend Kabelo as the
inspiration for him to start running.

Letshego Moshoeu and
Gugu Zulu: Letshego is a biokineticist who was a contestant on the
M-Net reality show Survivor SA: Maldives in 2011, while Gugu is a racing driver
and TV presenter. They participate in many running and cycling events as a
couple, and this was her first Oceans half and his third.

Hein Wagner: This man is
living proof that anything is possible – despite being blind, he has set a
world landspeed driving record and sailed around the world, to name but two of
his many, many achievements. This was his attempt at an ultra, and he made it
look easy – even though he was running with a new guide after his regular
partner had to withdraw due to a knee operation just a few days before the
race!

Thanks to the runners incredible generosity, a record
amount was raised for the Two Oceans Marathon Initiative (TOMI) charities this
year, and this saw cheques of R100 000 each handed over to the SANParks
Honorary Rangers, Western Province Athletics and The Cape Academy of Maths,
Science and Technology.

TOMI is the event’s official fundraising initiative that
provides much-needed support to select groups of charities, with the focus on ensuring
that the education and sporting needs of children are met, education facilities
are provided and upgraded, and environmental issues, involving parks, flora and
fauna, are included.

If you would like to make a donation to TOMI, go to www.twooceansmarathon.org.za
and click on about-us/event-charity-tomi, or you can do an EFT to:

GET
YOUR RACE PICS

The 2013 Old Mutual
Two Oceans Marathon was an event to remember, so check out your official race
pics online and order your copies today at www.jetlineactionphoto.com.

For a full list of results and category winners for the Old Mutual Two
Oceans Half and Ultra Marathon, go to www.twooceansmarathon.org.za.