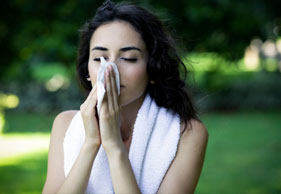 Just as
illness breaks down the immune system, so can extensive amounts of exercise.
About 21 hours after athletes have competed in an endurance event, there is a decrease in the amount
of white blood cells circulating through the body, which means an athlete is
much more susceptible to becoming sick. But a new immunity-boosting spray
called Immutides Spray is now available in South Africa, and might be a
solution for athletes who want to stay healthy and boost their immunity before
and after strenuous endurance events.

The spray
was created by Australian Dr Andrew Keech, who has a PHD in Biochemistry and
Biotechnology and says he has a personal mission to save lives. He was born and
raised on a dairy farm in New Zealand, where he learned about the immune
factors in colostrum (the first milk produced by the mammary glands of mammals). He
pioneered the concept of an ‘easy to use’ spray rich in proline-rich polypeptides
(PRPs), a powerful immune modulator derived from colostrum.

Three South African partners, Mike
Xego, Guy Saulez
and Gary Karlson, recently decided to import the product from the USA. Since
then the SA Health Department has issued it to a test group of AIDS patients,
some of which are bedridden, and the outcome has been promising, with patients gaining
strength and being able to participate in their normal daily activities again.
“Immutides Spray has also been known to supply great support to patients suffering
from other immune-deteriorating illnesses, such as diabetes and leaky gut
syndrome,” says Guy.

Having seen
the product deliver positive results in the health sector, ultra-distance
athletes are now trying the product out as well, as it promises to act as an
immunity-boosting supplement and reduce an athlete’s susceptibility to
infectious disease. “Four sprays in the morning and four sprays before bedtime
will do the trick,” says Guy, who claims that within two to three days you will
notice a difference in your energy levels. The product contains all natural
ingredients and consists of a simple string of amino acids, which means that it
is easily passed through the mucous membranes in the body and therefore easily
absorbed.

“For athletes about to take on an
event such as the Comrades Marathon, this spray is a great way to nourish your
immune system and keep flu viruses away before the big race day. Also, your
immune system will be run down after the race, and therefore it is important to
keep ‘boosting’ the immune system post-race,” says Guy.

Immutides
Spray has been passed by the Medical Control Council of South Africa, has a
NAPPI code and is available for sale in . For more info, contact
guy@saulezagencies.com or 082 450 3401.

Comrades runner, triathlete and
personal trainer, Angela Bott has used Immutides Spray on a regular basis for
over a year and says she has not once contracted flu or a cold in this time. “I
cannot afford to get colds and flu, so I started taking Immutides Spray as a
supplement to boost my immune system. When the body is too acidic, it is a
breeding ground for bacteria and virus. Immutides Spray lowers the PH levels in
the body and boosts the immune system, so you are less prone to contracting flu
viruses.”