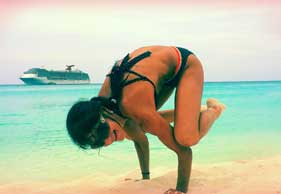 In October Alae Brand (28) returned to South Africa
for a short holiday after her first six-month contract working in the
Caribbean, and while here she finished seventh in the OUTsurance KFM 94.7 Gun
Run Half Marathon in 1:29:08, then clocked 1:28:09 to claim third in the Voet
van Afrika Half Marathon (a race she has won twice). Not quite up there around
her PB of 1:19:50, but not bad at all after just about no proper training for
six months on a ship that offers only a gym with treadmills, a short 200m circular
running track and splash pools… but Alae still manages to fit in keeping fit.

“I’ve always had the opinion that where there’s a
will, there’s a way. Even during medical studies, when I had little time for
myself, I still trained in the early mornings before class. While I never
thought I would ever be able to run more than 5km on a treadmill, I’m doing it
on the ship… but I go crazy running around in circles on the ships’ mini track,
so on my days off, I try to go running on land. I also do Pilates, and I swim
in the sea when we’re docked in ports.”

LIFE ON THE OCEAN

Alae studied medicine at Stellenbosch University, then
went to PE to do her Community Service year, where she met a fellow doctor who
had worked on the ships. “I have always wanted to travel, so I asked her to put
me in contact with the people who recruit doctors for the ships, and I was signed
up by the Carnival, the biggest cruise line with 24 ships. Normally you go into
a bigger ship with two doctors on your first cruise, and start as junior doctor
to learn the ropes, but fortunately Carnival had enough confidence in my
clinical knowledge and skill to start me on a one-doctor ship.”

She says the medical team have to know how to deal with
medical emergencies, medical outbreaks and disaster situations, such as bomb
explosions, natural disasters or collisions, and they have monthly drills for both
medical and general emergencies. “Ship’s medicine is totally different to
medicine on land, because we have a limited amount of drugs and we just have
the basic things like X-ray, portable ventilator, cardiac monitors, and we can do basic blood tests,
but we cannot do CT or MRI scans, ultrasound or other blood tests. The company has put ultra-sound in some ships, so we can check for
appendicitis, etc, but most ships still rely on clinical diagnosis. That said,
we can contact the medical ops manager any time, plus we can get a helivac, or
the ship can turn around or speed up in case of emergency.”

“It can be hard to do everything on your own, and if
things go south, it’s just me and three nurses. I’m literally on call 24/7, and
always have a phone and a radio on me for emergency calls. And with the typical
passenger, everything is an emergency! Luckily the nurses are well qualified
and can handle much of the first aid, but for prescription of medication, procedures
like suturing, and for guest accidents like falls next to the pools, the doctor
needs to see the patient, including crew members.”

At school Alae did gymnastics, earning provincial
colours and ending sixth at the SA Champs, but at 16 she changed her focus to
athletics. In her matric year she finished seventh at the Schools’ Cross
Country Champs, then at varsity she earned Western Province colours on road and
in cross country. In 2008 she took up cycling to help with an ongoing hip
injury, which led to duathlon, and she duly won the under-23 age group at the
SA Champs and represented SA in the World Champs in Italy. In 2011 she was
second at the SA Duathlon Champs and once again went to the World Champs (in
Spain), then in 2012 she won the Eastern Province Road Cycling Champs, the
Eastern Province Duathlon Champs as well as the Big 5 Challenge in Knysna.

Looking ahead, Alae say she wants to move into more
trail running and multisport events, and also wants to get into paddling, but
in the next 18 months she has signed up for various cruises in the Caribbean as
well to Australia, Alaska and Hawaii. “After that, it will depend on how long I
can keep up this lifestyle. I think I will miss training and competitive sport
too much to do this too long!”