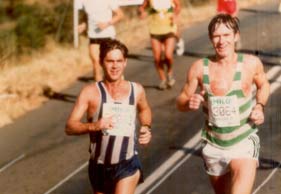 It was in 1971, while studying Civil Engineering at the University of
Cape Town, that Tony joined the UCT cross-country club and heard about the
legendary Comrades Marathon, which he decided to run that year. “That year Two
Oceans took place five weeks before the Comrades. Never having heard of the
race before, I ran it merely as a training run. In a field of 30 runners I
finished in 29th place in a time of 5:56. This was followed by
Comrades in position 896 in a time of 10:56,” says Tony. “Based on my
excruciating experience that year, resulting from gross non-preparation, I
resolved never to run Comrades again, or in fact any long distance race.
Runners were considered somewhat weird in those days, and so I retreated back
into a life of excess and slothfulness.”

However, something drew him back, and in 1973 Tony ran both the Two
Oceans and the Comrades again, this time much better prepared and clocking 4:15
and 7:47 respectively. He has not missed the Two Oceans since 1980, a run of 34
consecutive medals, and in 1995 he also ran his 10th Comrades, but says that training
for a good time in both races was demanding too much of his time, and so he decided
to focus on Oceans.

Tony cites his second voyage in 1973 as his most memorable, due to the
massive improvement on his first, “whereas my near-miss for silver in 1981,
clocking 4:00:48, would be one I would rather forget. However, 1982 was a
standout year when I achieved my first silver on my seventh voyage.” In 1985 he
ran his 10th Oceans and received his blue number as well as another
silver medal, and 10 years later he did it again. “I shall remember the silver
medal in 3:59:43 in 1995 as my greatest personal achievement in the Two Oceans,
10 years after the previous silver, at the age of 45, and it being my 20th
voyage.”

Another great memory, and unique aspect, of Tony’s Oceans career is that
his foxhound Roo finished five Oceans ultra’s alongside her master. “Roo joined
me in a close companionship, forged out of a joint love of running. She ran
five Two Oceans Marathons with me, including two where we achieved silver medal
times together.”

The best single running advice Tony has for anyone starting out is to
practise restraint and not take on too much to soon, as he did in his first
year. “On the one hand I regret that my demanding professional and family life
prevented me from achieving my full potential in running. But these days I see
that as being my saving grace, as it prevented the sort of destruction to the
body that has put paid to the longevity of many athletes who trained to excess
in their day.”

Tony says he has been fortunate to have wonderful friends around him
with whom he has shared running for many decades, and believes he has another
10 years of Oceans left in him. “There has never been a year that I have
questioned the decision to run again next year, but I am mindful that the time
will come one day.”