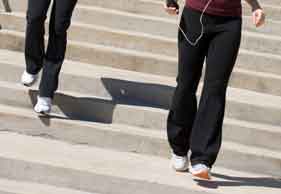 Pronation in the foot results from a combination of motions resulting in a
position where one’s foot is everted (rolls inward on the run). That’s normal.
We all pronate. In fact, without it, running would be rather uncomfortable… but
too much pronation, or over-pronation, can lead not only to unevenly worn
shoes, but sore knees and other niggles. Now, the theory holds that a larger Quadriceps
angle – the Q-angle at which the femur (upper leg bone) meets the tibia (lower
leg bone) – puts more stress on the knee joints and ankles, resulting in
increased pronation, and since women generally have wider hips than men,
resulting in a larger Q-angle, it holds that women will generally pronate more
than men.

For podiatrist Chris Delpierre,
of the Sport Science Institute of South Africa, the subject of women pronating
more than men due to their diverse biomechanics is a difficult one. “It seems
pronation has somehow become the bogeyman in running, an evil motion that
somehow is responsible for all our running injuries. It is in fact a very
normal movement of the foot and ankle during weight-bearing activities, that helps
with shock absorption,” explains Chris, who does however note that excessive
pronation can cause unnecessary stress. “The question about women pronating
more than men somehow implies to me that women should then get more running
injuries linked to pronation, which is not the case. Women definitely have
different biomechanics to men, and this means that women need different shoes, not
just smaller ones with different colours!”

Meanwhile, registered
biokineticist Faaeza Bala doesn’t rule out the
larger Q-angle theory: “It does change the biomechanics of women’s running
style compared to men, placing a greater amount of stress on the knee joint and
therefore increasing the risk of knee pain and injuries.” However, she says
there an even bigger factor in increasing a
woman’s odds of over-pronating. “The main factor is her ability to
become pregnant. During pregnancy, hormones are released in the body to loosen
ligaments in the pelvis to allow for easier delivery. Unfortunately, these
hormones tend to affect all ligaments, including those in the feet, which support
the arch and prevent over-pronation.” It’s the same reason why many women also
find their feet growing during pregnancy.

So while the myth remains an
up-in-the-air issue, there are definitely injuries that pop up with a larger
Q-angle:

?
The quads pull on the
kneecap, which can cause added stress on a long run, and over time this can
damage the cartilage on the underside of the kneecap, resulting in the common
over-use injury known as ‘runner’s knee.’

?
ITB occurs with
weakened hip muscles, whereby the illiotibial band, a stretch of tissue extending from the pelvis and hip and inserting just
below the knee, is crucial for stabilising the knee during running. The added
stress on the band will cause inflammation and pain on the band right next to
the knee.

The good news is that there’s a
way to get around injuries caused by over-pronation. “Exercises aimed at
strengthening the muscles supporting the joints in the foot can help to reduce
functional pronation,” explains Faeeza. “Also, exercises to strengthen the
thigh and hip muscles that stabilise the knee joint can also reduce the number
of knee injuries caused by a larger Q-angle, or wider hips.” In other words, by
strengthening one’s quads, the knee won’t be as affected by the natural
movement of the foot.