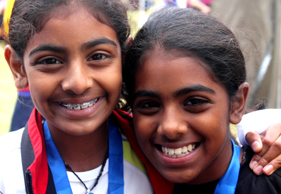 With
entries growing each year and a finish full of entertainment, the Sarens
Marathon is definitely going to be a race to tick off in the coming years – a
new favourite for elites and locals! Modern
Athlete even got a chance to see the route from the skies in the race
helicopter! Apart from giving elites and 5km fun runners a great route through
Edenvale’s quiet suburbs, sponsors Sarens and organisers Rand Road Warriors
were determined to make the race one for the family. With a line-up of vintage
cars, local company stands and arts and craft stands at the finish, competitors
and visitors could make the most of a chilly Sunday morning out.

“This year
we had a family mindset in organising the event,” says Dr Bernard Andersen,
Rand Road Warriors club chairman. “There was something for everyone, and we
also decided to focus a lot more on charities this year.” In keeping with this,
Sarens and the club offered high schools in the area an opportunity to win a
bursary for the school with the most entries in the race. “Now children are
involved in giving back and it’s great to see the charity angle of the race,”
says Bernard. “In the years to come, we hope to make this a bigger and better
race and aim to raise a lot more funding.”

Holy Rosary
in Edenvale, who entered over 130 runners, were hoping to win some funds for
their Phumelela Outreach Programme, which targets top learners from Dukathole
informal settlement to broaden their education. “The students took it upon
themselves to sell and advertise the race, giving each of the girls
participating a green ribbon!” says Jacqui Bunge of Rand Road Warriors. “There
were also a lot of runners and walkers from
and Edenglen Primary who wanted to raise some funds.” (In pre-entries, Holy
Rosary registered 135 runners ahead of Eastleigh Primary with 85 and Edenglen
Primary with 33 entries.)

The 5km was
dominated by children who wanted to work up a sweat. First runner in was
12-year-old Mavani Padayachee, who blitzed to the finish in 21 minutes in just her
fifth race ever, with sister Keara in third place in 22:43. The talented
sisters were a grand sight on the day, with many children under the age of 16
taking part in the 5km. “There were a lot of ups and downs, but great weather
to run,” says Mavani, who adds that competing with her sister always makes her
try harder, as they motivate each other. “It’s a great run to do and we’ll come
back again! We compete against each other, but it’s a good competition!”

Fourteen
year old Jonathan Bruce, who also took part in the 5km, was just as optimistic
about the event in the area. “At school, everyone gets involved,” he says, “and
I think we can keep doing these events, because even though it’s a charity, and
early, it’s so much fun!”

This year’s
marathon was closely contested, with ’s
Sipho Ncube winning the men’s race in 2:32:23 while ’s Belinda Waghorn won the women’s race
in 3:17:12. In the half marathon, Blue Sky AC’s Xolani Nkinane cruised home in
1:11:21, while Nedbank’s Irvette Van Blerk overcame teammates Rene Kalmer and
Nolene Conrad to break the tape in a stellar 1:16:18 in the women’s showdown.