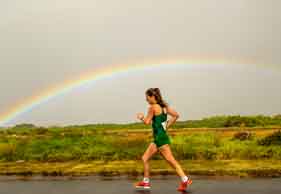 With the clock stopped on 49:25, Anel fell to her
knees in the road, holding back tears of happiness as it sank in that she had
not only achieved her goal of beating the 11-year-old SA Junior Girls’ Record
for 10km, but she had taken more than a minute off the previous mark of 50:37!
“I trained for the record, and I believe in myself, but I didn’t think I would
break it by that much. My 10,000m PB on the track is only 50:04, so I didn’t
expect to go under 50 minutes, and yes, I was very happy!” says the youngster
from George after dominating the women’s 10km at the SA Road Race Walking
Champs.

What made it even more special was that her parents,
Chris and Ria, were there to see her break the record. “They’re my biggest
supporters and are at every practice and race. My Dad even gets up at 5am to
ride his bike alongside me!” Also watching was her coach, Carl Meyer, on hand
to see her shatter the record set by another of his athletes, Lee-Anne Watts in
2002, just before he was himself due to start the men’s 10km. Despite warming
up for his own race, he was keeping an eye on Anel’s splits and updating the
commentator on Anel’s record chances. “Carl started coaching me this year and he
is a great race walker himself, with an amazing knowledge of the sport,” says
Anel.

Anel’s talent for race walking was first spotted by
Jurgens Kriegelaar in 2006. “I did athletics in primary school and one day in
grade five I was running the 1200m at the local grass school field when he saw
me doing something funny when my legs got tired. He asked me to stay a bit
longer after practice so his wife, Marie, could watch me too, and she
immediately said I really have talent for race walking.” The Kriegelaars were
spot on about Anel being a natural race walker, and with the help of their
coaching, she was soon making a name for herself.

She won her first race, the 3km development race for
juniors at the 2006 SA Race Walking Champs. In 2007 she won a bronze medal at
the SA Primary School Champs, then took home gold at the 2008 Champs in he last
year in primary school, plus added gold medals from the South Western District
as well as Western Cape Champs. That saw her decide to give up netball and
focus exclusively on race walking in high school, and in March 2009 Anel set an
SA Record for the under-17 5000m, then bettered it in April, and again in July,
and again in March 2010. In February 2011 she set a new national mark for
under-16 3000m, followed in March by an under-17 SA Record for the 5000m, then
an SA Junior Record for 20,000m (1:44:42) in April 2013, and most recently the
SA Junior Record for 10km on the road. And in the process she wracked up more
provincial and national titles than space allows to be listed here.

Having just finished high school, Anel will be
studying teaching at the University of Johannesburg. Her choice of tertiary
institution was very much swayed by the fact that her coach is based in
Johannesburg, as she has great hopes of making still more progress in walking.
“Next year I will be preparing for the World Junior Champs in the USA, and I
have also qualified for the Walking World Cup in China, but my biggest dream is
to go to the Olympics. Rio 2016 may still be a bit too early for me, but I’m
still going to try to qualify. The Olympics has always been one of my main
goals, right from when I started walking.”

Despite having come from a running start, Anel is now
completely dedicated to walking. “I feel most comfortable when walking, in my
zone. I can’t run anymore, because it just doesn’t feel right! Walking is my
passion, and I can’t imagine not doing it. If I have a rest day, I just want to
train. Like during exams, I just want to get out there and walk!”