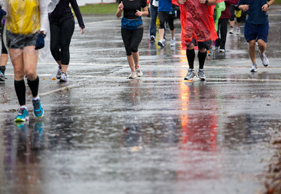 Nine boys from King Edward High School were struck by lightning and
injured while trying to cover up the school’s cricket pitch after rain
disrupted their practice session. Shortly after that, a Soweto teenager was
injured, and then a 17-year-old boy was killed by a lightning strike in the
Eastern Cape.

Most of us train outdoors, but how does one know when a storm can turn
‘deadly’ and when it is safe to enjoy the freedom of running in the rain?
“Storms are dangerous and they must be treated as such. It is far better to sit
around with friends moaning about not being out there – than sit at a friend’s
funeral because they decided to take the risk,” says Prof Ian Jandrell,
Transnet Professor of Systems Engineering and CBI-electric Professor of
Lightning at the University of the Witwatersrand’s School of Electrical and
Information Engineering.

Ian advises athletes to consider taking a ‘rain check’ when a storm is
brewing or it is raining outside. “Lightning tends to precede the rain, and
tends to continue after the rain has stopped. When we say that a storm is
dangerous if it is detected to be within, say, 25km distance, it is not just
because it can reach us quite quickly, it is also because lightning can travel
significant distances horizontally. You do not need to be under a storm cloud
to be struck!”

WHEN CAUGHT
OFF GUARD

Start every run by looking around to see if a storm is approaching,
receding, or perhaps just passing by. At least ensure that your route allows
you to take shelter if needs be. When you are unexpectedly caught in a storm,
Ian says there are several things you should do:

?
Seek shelter in the nearest building, or in a motor
vehicle or bus.

?
If you are in an open space, minimise your probability
of injury by sitting down cross-legged. This ensures that you are low down, and
that your contact with the earth is minimised.

?
If you are running in a group, spread out to allow at
least two metres between each runner.

According to Ian, sound travels at about 330 metres per second, and the
light of the flash reaches us instantaneously, so if we hear the thunder three
seconds after we see the flash, the strike is about 1km away, whereas a 30-second
delay between the flash and the thunder would imply that the strike was 10km
away. However, be warned that this would still be considered to put you at very
high risk.

“If lightning is that close, you needed to have taken shelter a while
ago! We consider lightning 20km away to pose a danger,” says Ian. “You are OK
if the storm is more than 25km away. But beware: Storms can move very fast; and
lightning can travel significant distances horizontally.”

One of the biggest dangers is fibrillation of the heart, caused by
current flowing through the body and affecting the heart muscles. Immediate
application of CPR is important. However, the most important piece of advice
Ian can give anyone is to rather be safe than sorry! “Many folk have run
through storms with no ill effects. But, equally, many folk minding their
business outdoors have been killed. Choose safety over ill-informed bravery!”