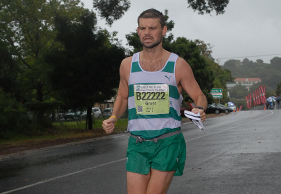 In 1976 the
late Lionel Whitfield, a prominent member of the Buffalo Club in East London
and staunch supporter of Buffalo Road Runners, expressed to fellow-Buff and
close friend, the late Viv Rex, his desire to start a race to honour his
father, George Washington ‘Washie’ Whitfield. There must have been drinks
involved in the conversation, because somehow they came up with the idea for a
100-mile (161km) race from East London to Port Alfred, to be run at full moon
so that the runners could se where they were going during the night!

Fast
forward to 2013 and Grant Whitfield of Cape Town has set his sights on running
the race named after his great grandfather. “As far as we know, nobody in our
direct family has ever run the race, so when I ran my first Comrades four years
ago, as did my cousin Vaughn Kelly, we began talking about doing the Washie,”
says Grant. “We have no idea why Lionel decided on a 100 miler, since my dad
says he never did any running… except maybe to the pub. He was killed in a car
crash when I was three, so I don’t remember him, but I’ve heard a lot of
stories about him. He was a big chap at six foot five, could drink a beer in
three seconds, and my other grandfather, a small Scotsman, said he could never
keep up with him in that regard.”

Having
played rugby throughout his studies in graphic design at UCT, Grant took on his
first half marathon as part of the Men’s Health Challenge. “Then I ran the Two Oceans
Marathon with my two brothers-in-law after being challenged one evening around
the braai by my father-in-law, who was a big runner in Celtics in his day. I
think he must have caught us after a few brandy and Cokes!”

Grant will
be running his fifth Two Oceans and fourth Comrades this year, but says the
Washie has to wait a bit longer. “I must be honest, the thought of running a Comrades
and then doing it all over again immediately is a bit daunting, and I want two
or three more Comrades on my legs before I go for Washie. Also, I’ve got two small
kids at the moment and Comrades already takes a lot of time. So Vaughn and I haven’t
put a date on it yet, but we will get there. And we told my dad he has to come
as our second, because he is a doctor – and we’re going to need him!