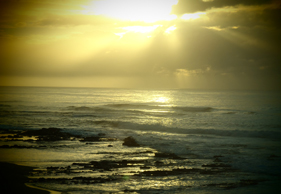 As I sit down to put my experience on paper, I struggle to find the
words to describe my six-day-journey at the Wild Coast Ultra, a 250km race that
starts at the Umgazi River mouth and finishes on Nahoon Beach in East London.
After waiting to do this event for three years, and after all the planning and
all the dreaming, it was finally here.

The truth is, I was nervous as hell. The furthest I had ever run in a
week was 160km, and that was primarily on tar. Now I was planning on running
250km on terrain that in Jo’burg you simply can’t train for. In preparation for
this race, I had taken part in the three-day Umgeni Trail Race in August 2012 –
not only my first trail race, but my first multi-day trail race at that, and winning
the event overall! I also ran a 21km trail race in Buffelspoort in December,
finishing in third place despite being diagnosed as anaemic.

Apart from that, I had tried to do all my weekend runs on trail, and I
hoped I could challenge for first place at Wild Coast, which I figured was
probably a little ambitious given my recently diagnosed anaemia, and the fact
that I most certainly could not call myself a trail runner.

The day before the race we all introduced ourselves and I found myself
amongst both newbies and those who had taken on some serious challenges. My
greatest achievement? Finishing Comrades, which in the light of what we were
facing and what the others had done in the past, seemed somewhat insignificant…

The air had a mix of excitement, nerves and fear of the unknown. We were
about to run along one of the most beautiful coastlines in the world, with no
checkpoints, no water tables, no marked routes. Then a simple gong of a cattle
bell sounded the start of the Wild Coast Ultra. The appeal of this race for me
was the adventure of being out there on your own, figuring out your way to the
day’s finish.

For a large part of day one we ran quite far inland, through thick white
beach sand, over narrow grass single track, down steep rocky forest areas,
through thick grass paths and along rocky dirt roads. I ran with a sense of
freedom. I was out here in the middle of nowhere, I was running wild, I was
running free, and for the most part it was simply me and my creator. The
feeling was exhilarating.

Day one saw me finish at the Ocean View Hotel in second place after
running further then necessary due to little detours. I was tired and my legs
were sore. Had I gone out too hard? I had finished the day in 7:09, but I
really felt a time closer to six hours would be more reasonable if you knew
where you were going.

I woke up feeling a little tired, but not too bad. Day one had felt
tougher than my last two Comrades runs, but I was ready for more running, and
with a slight ‘old man shuffle’ I was underway. We set out past White Clay and
along the cliffs, which has to be some of the most amazing and stunning
scenery. We reached Hole in the Wall and it was beautiful! Then after taking a
few wrong turns, I set off for the day’s finish at The Haven, feeling certain
that this delay would have left me in second place again. But it hadn’t, and I
finished first in 5:24.

I woke up feeling like I had been dragged through a bush backwards. I
felt broken. I tried not to think about it, I simply got ready, filled my pack,
ate some breakfast and headed to the starting point. I managed to open a decent
lead, which was a good thing, as once again I made some bad navigation errors.
I ran along the beach for 20 to 30km and never saw a single human being. There
were no other footprints in the sand.

Suddenly the strangest thing happened: I began to miss people. I had
been taking people for granted and for the first time in my life I began to
realise that we have been created to be part of a community. So I was very glad
when I saw people as I finally arrived at Kob Inn in first place in a time of
4:47

I felt surprisingly good and was eager to get underway, but it was tough
going into a strong headwind. This was a short, predominantly beach run, with
lots of thick sand and rocks, but on the hard flat sand sections I was able to
get into a fairly decent rhythm. I finished the day in 3:21, and it felt far
too short as the sad realisation dawned on me that we only had two days left.

I love running in the rain and I couldn’t have felt more blessed to be
running this stunning coastline with God pouring out his blessings upon me. I
felt a lightness in spirit. The Morgan Bay cliffs were amazing! Once around the
cliffs, it was a hop, skip and a jump to Haga Haga and our final sleepover. I
finished the fifth day in 3:09 and it was nice to get warm, get the legs up and
sip on a warm cup of coffee.

The final day dawned. Where had this week gone? I didn’t want this
adventure to end… The day’s run was broken into two sections. The first was a
run from Haga Haga to the start of the Surfers Challenge event, approximately
27km, and the second was the Surfers Challenge itself, a popular 18km race.
Before I knew it I was at the starting point of the race.

The idea of hammering out a tough 18km after having already run 232km in
a week was an intriguing challenge, and on the run I hit the wall. One of the
female spectators shouted, “Come on, run! You’ve been passed by a woman,” but my
body was screaming for the finish line and I simply had to settle for being
‘chicked.’ It was certainly the toughest 18km I have ever run!

AFTER ALL
WAS RUN AND DONE

I woke up the next morning and felt like I could run back to the start
over the next week. My mind struggled to process the last six days. It had been
a blessing, a gift, a wonderful experience and a journey. You don’t race the
Wild Coast, you experience it!

What more can I say? The organisation was superb, the goodie-bags were
the best, the accommodation was top class, the food was fantastic, and the
competitors were all a great bunch. But above all, our creator had kept us all
safe, provided us with superb weather and poured out his blessings on us each
and every day.

Words simply can’t describe this event. Make sure you put this one on
your bucket list!