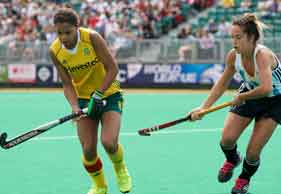 Marsha’s r?sume makes for impressive reading: Over 300 test caps and
appearances at two Olympic Games, three Commonwealth Games and two World Cups. She
made her international debut in 2001, has captained the side since 2006, and
says she has come a long way since first breaking into the team: “The
differences between 18-year-old me and myself now is my physical strength and
toughness, and that I can handle pressure better.”

Her flair for the game runs in
the family – her mother, Marian
Marescia, has often been described as the best player to never play
internationally for South Africa, due to Apartheid – and Marsha has been
involved in the sport since a young age.
“I basically grew up beside the field with my mum being a provincial
player in KwaZulu-Natal as well as a provincial and junior national coach. I
chose hockey as my main sport from grade nine.”

Marsha spent many years playing
for Southern Gauteng and has just started her second season with Premier League
side SV Kampong in the Netherlands, where she lives with her
husband, Alex Cox, who is also a women’s hockey coach and was an assistant
coach to Dutch women’s hockey team that won gold at the London 2012 Olympics. While
adapting to the Dutch culture remains challenging, Marsha has plenty of help
and support from Alex, as well as her club and teammates. “The hockey has been
challenging, as we have a few Dutch internationals as well as the German
national captain, but it’s easier with a lot of foreigners in Utrecht, which is
a student town, and the club really makes an effort to make you feel at home!”

Averaging 9.5km of running per game,
Marsha’s fitness needs to be consistent, so running – both endurance and
sprints – remains a vital part of her training. “A hockey player needs to last
70 minutes at a high intensity and speed to keep up with and eliminate
opponents, and you also need physical upper body strength. We don’t pump
ourselves up in the gym, but we work on having a good core strength base that gives
you explosive power.”

In a typical week, Marsha’s
training will include agility and weight training on Mondays and Wednesdays,
and a focus on score fitness and speed on Tuesdays. Thursdays are reserved for
two team sessions of two hours each to work on match preparation, and she spends
another two hours with the club on Fridays before resting on Saturdays ahead of
Sunday match days. It’s also a plus having Alex around, says Marsha, with his
understanding of the demands of a pro. “We share the love for the game and
fully support each other in our respective roles in the sport. However, not
training together helps us to enjoy our time together away from hockey!”

Apart from her debut and 300th
test matches, Marsha says her other career highlight is her first Olympic
experience in Athens 2004, where the SA team beat eventual gold medallists
Germany and placed ninth overall. Looking ahead, Marsha says 2014 holds many
exciting opportunities: “Next year it’s the FIH World Cup and Commonwealth
Games a month later, and my goal is to leave Scotland after the Commonwealth
Games with a medal! I care so much about the progress, process and success of
the team, and it keeps me motivated to play my part on the field!”