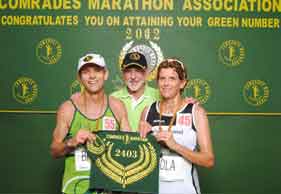 One of the most enduring images of the 2012 Comrades
Marathon was the sight of two of South Africa’s most iconic runners finishing hand-in-hand,
in just over eight hours. While Zola Pieterse, the barefoot track sensation of the
80s was completing her first Comrades, Bruce Fordyce was coming home for his 30th
medal, and shortly after finishing, he would confirm his retirement from the
Big C, saying it was an incredible way to bow out. “I was trying to run
sub-7:30 for one last silver medal, but then I saw Zola walking with about 30km
to go and decided to stick with her. The reception we got throughout the rest
of the race was simply amazing.”

Typical of Bruce, he spent much of those 30km telling
everybody how great Zola was doing, but the adoring spectators were not to be
denied their hero worship for the man widely known as the Comrades King. That’s
because in the early 80s the South African public was exposed to live TV
coverage of the emotionally-charged Comrades for the first time, and for the
next decade millions of people would tune into the full-day broadcast and watch
the willowy runner with flowing blonde hair come from behind in the second half
of the race, give his opponent the famous ‘Fordyce Kiss of Death’ and then power
on for yet another win. Bruce’s Comrades exploits thrilled the SA public,
turning him into a national icon and helping the race explode in popularity.

Today,
Bruce (58) remains a competitive runner in the Master age category, and says there are still running items left on his bucket list. “I’ll be doing my
30th Two Oceans Marathon in 2014, and in my insanity, I have
accepted an invite to go run the Western States 100-miler in the USA in June.
But my next big goal is 2016, when I start competing as a Grandmaster, because
I’m getting hammered in the Masters now by younger runners!” He also says he
may still run the Comrades again… “I would like to run the 100th
Comrades when I am 67, and if one of my kids decides to run it, I would go with,
but for now it works better for me not running, as I can do more networking at the
expo and can do TV commentary, which I really enjoy.”

Born
in Hong Kong and initially schooled in the UK, Bruce moved with his family to
Johannesburg when he was 13. At school he played rugby and soccer, but running
was already proving his strength. “The longer the
event, the better I was, and in standard nine and matric I won the 5000m, 10 000m
and cross-country – but it was a small school, so if you could run the whole
way, you’d probably win,” he jokes. While studying at the University of
the Witwatersrand, he made his Comrades debut in 1977, finishing 43rd,
then improving to 14th in 1978, third in 1979 and second in 1980.

In
1989 Bruce took the year off from Comrades to successfully go after the World
Record for 100km, clocking 6:25:07 in a specially arranged international race
in Stellenbosch. “I felt I needed a break from
Comrades, and wanted to see how I compared to the rest of world, even though I knew
wouldn’t be able to recover in time to race Comrades that year.” Some people
believe that 100km race, run in incredible heat, effectively shortened his Comrades
reign, but Bruce dispels this theory. “Look, I still won another Comrades after Stellenbosch, but in my slowest
time, and I think I was past my best. Mark Page gave me a real run for my money
in 1990, and it was only when he walked at the bottom of Pollies that he even gave
me a chance. My sister, Oonagh, was the first to give me a hug at the finish,
and all I said to her was, ‘I’ve lost it. I feel like I just won by default!’”

The
following year Bruce was beaten at Comrades for the first time in over a
decade, cruising home in 328th position after experiencing stomach
problems mid-race. Three years later he returned to finished a very respectable
19th, but his racing days were over and he became a popular mid-pack
runner. Now, looking back, Bruce says he can still remember
the details of each of his nine wins, but cannot choose a favourite. “I think I’m like a mother with her children – each win was special in
its own way, although 1986 was special when I became the first to get six wins.
What I can say is that 1982 was probably the hardest, because Alan Robb and I
went flat-out for a 20km race within the race, from the top of Bothas until
going down Fields, hammering away at each other. That was also the longest
Comrades ever at 90.4km, so our time was actually a sub-5:30.”

After retiring from top level competitive running, Bruce
says he found it easy to stay motivated to keep running. “I love my running, so
even though the pressure was off, I still wanted to keep going for finishes. Ironically,
I didn’t feel at all competitive in my 40s, but now in my 50s I have gotten
competitive again, but at the shorter distances only. Also, I have found a
great group to train with here in Johannesburg – we call ourselves the Tyrone
Harriers, because we meet in Tyrone Road – and even though I am self-employed
and don’t have to get up to run at 5:30am, I enjoy the company and the laughs.”

These laughs are often thanks to Bruce’s wicked sense
of humour, especially on April Fool’s Day! “A couple of years ago I had them all
‘arrested.’ Colonel Moodlie of the local Parkview Police asked me to address his
staff, as a favour, so I said he can pay me with a plot on April Fool’s Day. He
was only too happy to oblige, so at 5:25am the cops arrived with blue lights
flashing and began arresting my fellow runners for disturbing the peace, and we
had them going until they turned around and saw me with my arm around the colonel.”

On the work front, Bruce is now heading up the parkrun
SA initiative, the social running phenomenon taking SA by storm. “In two years
we’ve gone from 22 runners to 36 000, and it’s growing by 2000 every week. Our
next target is 100 000, and I would love it if every town in SA has a parkrun someday
and we can introduce as many people as possible to running or walking.” Bruce also
remains a popular motivational speaker, and says it is a thrill and honour to
be treated like a celebrity wherever he goes. “If you had told me at 16 that at
58 people would still want me to sign an autograph, I would have said that’s
amazing.” And no matter how many years pass, the running community still laps
up his running stories, particularly when he explains how he delivered the famous
‘Fordyce Kiss of Death.’

Bruce
famously wore a black armband as he won his first Comrades in 1981, one of a
number of runners protesting about the race forming part of the Nationalist
government’s 20-year Republic celebrations. “I’m still very proud of our protest – that was one of the better things
I did in my life, because I could not reconcile myself to be part of celebrating
20 years of Apartheid!” Today, Bruce is far more positive about South Africa:
“I have been fortunate to travel all over the world, but I love being here in
South Africa. Now parkrunning is keeping me busy and continually motivates me…
and I am plotting my next April Fools joke for the Tyrone Harriers!”