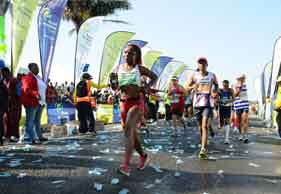 In 1993, Argentina discovered an itchy, swollen rash
on her right leg, and experienced bouts of fever, nausea and pain that kept her
from walking, or sleeping more than two hours at a time. This condition persisted
for five years and had the doctors stumped, until eventually they suggested
amputation as the last resort. “For me, amputation seemed a relief. After years
not being able to walk by myself, it would be freedom,” says Argentina. “All I
had to do was wait for my mother to travel from Mozambique to Joburg to sign
the operation papers.”

However, by a fortunate turn of fate, her mother was
delayed due to problems with her visa, and while Argentina lay in the
Johannesburg General Hospital, waiting for her operation, two sisters from the Universal
Church of the Kingdom of God paid her a visit. “I was having a crisis of faith,
but then Fiona and Margaret came to pray for some patients. At first I felt
like they were showing off their faith, but they told me that I needed to
believe. I let them pray and there was a sense of peace afterwards. After years
of not being able to sleep through a night, I did. Something had changed…”

The next morning, she was confident enough to attempt
to walk to the bathroom by herself. Fiona and Margaret returned later to take
Argentina to visit their church, where members prayed for her. “I told the
hospital to book me out, despite my serious pending op, and four weeks later I
was walking comfortably. The swelling had gone down and only scar tissue
remained!”

Many sceptics told Argentina that the pain would
return, but instead of listening to them, she took up running! “I noticed a
neighbour running every morning and I asked him to teach me to run. I thought
that if I’m healed, I’d be able to catch onto running. It was my new dream.” So
she joined Rand Athletic Club (RAC) and decided to take on a 5km walk, which
she did wearing socks and sandals because her foot was still swollen. She was
tired when she eventually finished, but with a new sense of strength that saw
her build up to alternate between walking and running and after three months,
she finished her first 10km in 55 minutes.

In 1995 she ran her first 42km at the Soweto Marathon
– the first ever black woman from RAC to compete in the race, with an
impressive time of 3:45. Next Argentina pushed on to the City to City 50km in
1996, where she finished in 4:45, and after that, it was a natural step to Comrades
1997, but Argentina admits she had no idea what she was getting herself into. “I
remember reaching halfway and figured we were finished, so I asked someone
where I could get my medal. They laughed because I was only halfway!” She
pushed on, though, and finished in 10:30. Today she has 16 Comrades medals, with
a PB of 8:30:17, and has also conquered the Two Oceans 15 times, with a best of
4:53. She set her marathon PB of 2:54 in 1998, and also conquered the New York
Marathon in 2010 in a time of 3:18.

In 2002 Argentina finished third at the SA Cross
Country Champs in Bloemfontein and was selected for the SA team, and today has
five gold medals in various age categories at SA Champs in her collection. She
also gave Masters Athletics a try and is a regular on the podium in events from
1500m up to 10 000m, including the 2000m steeplechase. This year, she
travelled to Brazil for the World Masters Athletics Champs and finished the
marathon in sixth position in the 40-45 age category, with a time of 3:50.
(Today, she puts her running experience to good use as ASA development coach to
young athletes from the age of 10 in cross-country and track.)

On top of her comeback from nearly losing her leg,
Argentina says her results in the past two years are even more special, since
she had to overcome yet another setback after being involved in a car accident
late in 2011. “I had head and spine injuries, and I suffered from blackouts, but
after months of pain and treatment, I was back in 2012 and finished Comrades in
10:20. I don’t know how I get back so quickly, I just know I have had the
strength and support to keep coming back!”