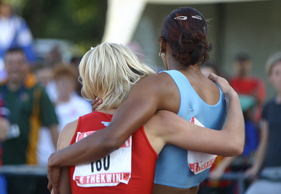 When Geraldine was picked
for the SA Team for the first time in 2003, to participate at the IAAF Track
& Field World Champs in , she got
a tattoo of a Springbok emblem on her right shoulder. “It was a celebration of the hard work that had paid off and also
achieving the highest level in SA sport!” says Geraldine, who also represented
her country in the Olympics, Commonwealth Games and African Championships. “For
me, it was a huge honour – this wasn’t just school anymore! I was proud to
perform at the highest level and inspire people.”

In 2004, Geraldine grabbed a
gold in the 200m at the African Champs, along with bronze in the 100m dash.
When she got to the Olympics later that year in ,
in front of an 80 000-strong crowd she placed sixth in the 100m final and was
overwhelmed at the attention she received. “People don’t care if you’re number
one in the world. To be there and compete is quite something,” she says.

Two years later, at the
Commonwealth Games in , Geraldine upped her pace
in the 100m to clinch silver as well as bronze in the 200m. In the same year,
she won silver in the African Championships 200m. She also holds a fourth
placing at the IAAF World Champs and competed in ,
, and . “As a pro
athlete, I got to travel the world and meet people like Carl Lewis and Thabo
Mbeki.”

Her fearless attitude on the
track came from her days at primary school where she came second in an
inter-house athletics race and her love of running only grew from there. “I
loved competing in front of people and this continued into high school,” says
Geraldine. “I had never thought it could be a career for me, but I remember a
teacher telling me I could run at the top level.”

She became a force on the SA
running scene and admits sacrificing a lot in order to succeed. “I never had
time to socialise – I had a strict schedule!” In full training, Geraldine would
hit the track for two hours every morning before a one-and-a-half hour gym
session later in the afternoon. She would also go for sports massages and made
sure to eat properly to recover and prepare for competition. “I always thought
to myself, ‘if this doesn’t help me run 11 seconds, I’m not going to eat it!’”

Since 2009 Geraldine has
held a position on the ASA Board as chairperson of the Athlete’s Commission. “My
job is to fight for the athletes and make sure their needs are being met by
ASA. It helps that I was in their position a few years ago.”

Geraldine juggles being a
mom to 15-month-old son Diego and coaching athletics at
in . In her down time, she loves nothing
more than to put Diego in his stroller and walk in the park. After her
pregnancy, she was committed to get fit again and coaching helped: “The
training is intense – it is the only way I know how to run,” she says. “I gymmed
three to four times a week and stuck to a programme I knew would see me lose
fat fast.”

As a coach, Geraldine feels
privileged to see her athletes develop in front of her. “I see the shy guy develop
into the stand-out runner,” she says, “and that’s why sport is important – it
not only builds character, but reveals it.”

Geraldine came under fire
recently for questioning Oscar Pistorius’ inclusion in the 400m individual race
at the 2012 Olympics. This is what she told Modern
Athlete:

“I have a mandate to fight for fairness when it comes to athletes and
selection. So many athletes suffered because of the strict SASCOC selection
criteria, so it was unfair for one or two athletes still to be included while the
rest stayed at home. I was not trying to launch an attack on Oscar. I wrote a
letter to SASCOC explaining my comments and I said if they perceived it as
bringing the sport into disrepute, then I apologise for that. However, that
doesn’t mean I’m backing off from what I said. Oscar didn’t qualify for the
400m individual race, but in the end participated in that race, while Simon
Magakwe had to watch the Olympics at home.”