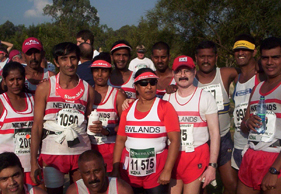 By ‘word of
mouth’ in recent months, Newlands AC has become a much more noticeable and
proactive club in the
region, even though they’re a relatively small group of 82 members. “The club,
two decades old now, was formed by members of the Newlands community, and we
have a band of hardworking members who give their time and energy,” says Club
Chairman Raj Rabbikisson. He says the club’s mission this year is to make a
meaningful difference in the community and get more people active and healthy. “What
we want to do is grow membership – especially with youngsters who have the
desire to get fit – and form partnerships with other sporting clubs.”

Raj adds
that while the club’s philosophy now is focused on promoting exercise so kids
can fight obesity, they also have other community-based goals in mind. “We also
want to engage with the wider community by assisting in social upliftment
programmes, for example, assisting orphanages and schools.”

As a club, the
Comrades Marathon is always an event the club puts on a proverbial pedestal,
with 29 participants in 2012, of which 24 crossed the finish line. The club
traditionally organises a pre-Comrades pasta party to share some pre-race running
tips from the experts and ‘psyche up’ those participating! The pasta party is not
only a means to carbo-load, but also gives the Comrades novices an outlet to
ask questions. Then after Comrades, the club hosts a family fun day to
celebrate a conquered Comrades. “It reinforces general camaraderie,” says Raj,
“and we also thank those who aren’t running, but are out there marshalling our
water stations.”

At the end
of each year, the club awards function celebrates those members who achieved
their personal bests and the challenge races the club marks out each year. “To
promote interest and participation, we draw up a list of 25 races,” says Raj, “and
members are challenged to participate in a minimum of 10 races from the list. Those
who achieve this are rewarded, and this has proved to be a real stimulus for
club members to support races – even walkers can participate!” To ensure the
success of the awards evening, members rally around donating trophies, printing
and selling tickets, taking photographs and doing the evening’s slideshow.

In the past,
the club hosted a 42km and 15km and would like to get these races going again
to boost the club’s profile and grow membership. Joining Newlands is an easy
decision – it’s an affordable fee of R220 per year, says Raj. “For new members,
the club can offer a lot! We have many experienced runners and walkers to guide
new members, no matter what their goal.”