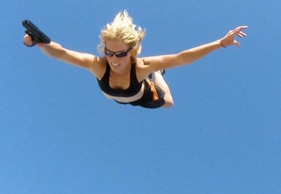 Ask Fleur van Eeden about a day in her life and it sounds like a fairytale.
If she is not on her mountain bike in Swellendam, running around in stunning
gorges, or paddling with her boyfriend in Knysna, she is on a glamorous movie
set, mingling with actors and performing stunts that are physical, spectacular
and almost always dangerous. And that is one of the reasons why Fleur makes
sure she is super fit. “You need to be very fit and condition your body
constantly. I love mountain biking and running, and use these two
disciplines as my main sports to stay fit and gain a fitness base,” says Fleur.

As a child she
participated in tug-of-war, athletics, hockey, horse-riding and running, then
after school, while studying public relations, she represented in
tug-of-war. She also worked as a river guide on the Breede and Orange Rivers,
and this is how her career as a stuntwoman started. “I worked with a guy whose
brother opened a stunt company in Cape Town called Pyranha Stunts. I contacted them
and a few months later, on my 21st birthday, I got my first stunt job on the
American mini-series Triangle. I had to sit on a rubber duck in huge water
between the Waterfront and Robben Island. I loved it and got called a week
later to be in a ‘plane accident.’ I was hooked.”

Many days she does ‘normal’
day-to-day stunts, such as horse-riding, but then there are always the awesome
new challenges. “There is always a risk of getting hurt, but it is done in a
controlled environment where the stunts are made as comfortable as possible,”
she says. The most dangerous stunt Fleur has performed was while connected to a ratchet (a machine that yanks you and you go flying). “I
was yanked through two swing doors and literally got pulled through the door.
It looked amazing, but I hurt my knee and had a concussion.”

RUBBING
SHOULDERS WITH THE FAMOUS

As a stuntwoman Fleur has rubbed shoulders
with the rich and famous and has most recently worked alongside Samuel L.
Jackson on the movie Kite. She can
also add the movies Dredd 3D, Doomsday, Blue Crush, Primeval and Death Race to her CV, to mention just a
few. “In South Africa we produce between five and eight
movies a year and I usually double all the actresses.”

And when she is not
jumping off buildings, on her bike or running, Fleur spends time with her partner,
adventure racer Graham Bird of the team Merrell Adventure Addicts. They make an
ideal couple, given that he is just as fit and active. “I believe if you put
your mind to doing something physical, your body will follow. My job challenges
me physically and mentally. And it proves to me how amazing our bodies are.”