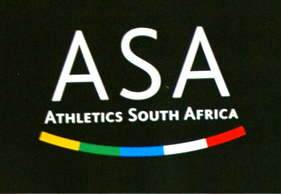 Clandestine meetings, allegations of financial
mismanagement, board members being suspended, to-and-fro court battles… that
has been the norm at ASA in 2013. At one stage a large faction of the Board,
led by Hendrik Ramaala, tried to oust President James Evans, resulting in them
being suspended, which prompted the South
African Sports Confederation and Olympic Committee (SASCOC) to once again suspend the entire
ASA Board and take over the running of the sport by appointing interim
administrator Zola Majavu. However, the International Association of Athletics
Federations (IAAF) then got involved, telling SASCOC to hand the sport back
over to ASA, or face ASA’s suspension from international athletics – and thus
the exclusion of SA athletes from all competition outside of SA.

Sadly,
SASCOC reacted by suspending ASA’s membership and announcing that our athletes
will not be selected for Olympic, Commonwealth or other World Games teams until
further notice. (ASA can, however, still send teams to World Champs and African
Champs, and athletes can continue to participate overseas as individuals). The
Olympic body also said it would withhold financial support for athletes in the
Operation Excellence (OPEX) Programme, but subsequently withdrew that decision.
While the impasse between ASA and SASCOC has yet to be solved, James says that
bridges have been mended within ASA and the way forward is being discussed and
planned.

Modern Athlete (MA): What is the status of ASA?

James Evans (JE): ASA is still the
national federation for athletics in and recognised by the
IAAF as such. The office and the Board are recovering from the mayhem earlier
this year. It will take time, but Hendrick and I are working with the staff in
the office to get everything in place going forward. Officially we have still
not been notified by SASCOC that we have been suspended or why. There have only
been media reports. We have asked SASCOC for clarification, but they have not
replied.

MA: What is the IAAF’s position?

JE: They have made it clear that they will not permit
interference with their national federations. While they regard as
one of the top athletics nations, we are but one of 212 and they cannot make a
special dispensation for our country. If, in any way, the laws of our country
permit interference and anyone acts in that way, they will have no choice but
to banish us into the wilderness as we were in prior to 1992. That is the last
thing that any athletics person should want.

MA: So should our athletes be setting their sights on qualification for
the Glasgow 2014 Commonwealth Games?

MA: What is the current financial position of ASA, are there potential
sponsors on the horizon, and what does the deal between ASA and the SABC entail?

JE: The broadcast rights contract with the SABC is
confidential, but in broad strokes, they bought the rights to televise all
athletics events. That fee covers the costs of our teams and running the
federation. The SABC also has certain obligations to televise certain events,
but because of the disruptions this year, the contract was not fully carried
out.

MA: With track & field struggling, will provinces, clubs or
professional events companies be allowed to organise top level (permit) track
meets in order to build the sport up again?

JE: For the past two years we have been attempting to get
clubs, provinces and organisers to put on one-day meetings, as it is done
everywhere else in the world. Only Athletics Central North West and took up the challenge in
2013. We have asked for 2014 events, and have one additional meeting in , but they are
the only ones. This is disappointing. For years people complained that they
weren’t allowed to organise permit meetings. Now that we want them to, they are
nowhere to be seen.

MA: Given the messy cancellation of the
, how do we ensure less cancellations
of events, and smooth organisation of those that stay on the calendar?

JE: Marathon was a
disappointment because Central Gauteng Athletics and the clubs in demanded that they
be given the race to organise, then they cancelled it! We had a sponsor
approach us and I know that the City of
always supports the event, so we can only surmise that there were other
reasons. We need to change the system in SA, where events get added and cancelled
at a moment’s notice. It is not good for the sport, and we need to make sure
that when people say they want to organise an event, they have the financial
and organisational capacity to do so.

MA: I believe existing road races throughout the country are now being
invited to host SA Championship races in conjunction with their event, instead
of ASA organising stand-alone events?

JE: Yes, that will apply to road, trail and mountain
races. (Incidentally, the IAAF is looking towards the same solution for the
World Half Marathon Championships.) ASA’s job is not to micro-manage the sport,
but to provide the framework for the sport. That is not well-understood in SA,
where people expect the national federation to finance and organise everything.
Nowhere else in the world does it work like that.

MA: You have been criticised for your leadership style and decisions,
not to mention accusations of financial mismanagement. This must be affecting
your ability to get on with the job…

JE: I am glad you say allegations, because eight months
later I am still waiting for any evidence to back the allegations. I think by
now it is safe to say that there is none. I am just disappointed that people
are quick to make and believe allegations, but are far less interested in whether
they are true or not. Also, the media are going to have to look at themselves
long and hard. The Press Code is clear about the need to verify sources and
thereafter to get comment before stories are run. However, most journalists
merely repeat allegations without worrying about the truth or the harm they do.
The fact that they didn’t question why, at any stage, or ask for proof of
allegations, is a damning indictment of the media in general.

MA: So what is the road forward?

JE: I have repeatedly said that we need to relook and
modernise our sport. Much of the present structure and mindset is based on the
1980s and 90s, but the sport has moved on internationally. Our constitutional
framework is clumsy and out of date. In fact, so out of date that the Companies
Act forced a number of automatic amendments in May, which we should have done
ourselves. We also have to amend our constitution to bring it in line with the
IAAF Constitution, and the National Sports Plan and resolutions taken at the
National Sports Indaba. This has to happen before the end of the year, or we
risk losing government funding.

MA: What are the most likely changes?

JE: There needs to be a realignment between the
commercial management of the sport and the pure sport-related decision-making
process. Athletics has to become a commercially viable sport and we cannot rely
on handouts anymore. For that to happen, commercially experienced people need
to guide that part of the federation. Also, we cannot, in terms of the National
Sports Plan, continue with the current demarcations of our members. We have unified
political provinces, but within and
the
we have three ASA provincial members each. We need to follow the District and
Provincial boundaries, similar to what football has done, and that may mean
standing on the toes of some provincial empires, but if we want to optimise our
funding sources, then it is no longer open for debate.

MA: So is there light at the end of the tunnel?

JE: Yes. With the IAAF supporting us and most of the
athletics people working together again, Hendrick and I are confident that we
can rebuild ASA to where it should be, both nationally and internationally.