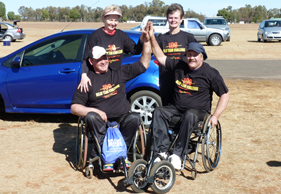 I was involved in a hit-and-run motorcycle accident in
2005 and I ended up with several broken ribs, a broken back and suffered major
head trauma. The doctors told my wife that I wouldn’t survive the operation,
but after two and a half months I was out of ICU and started rehab. Paralysed from
the abdomen down, I started to do some strength work, but it was difficult.
It’s then that I met Pieter and the group of guys at Rademeyers.

Pieter told me to start off with a 10km with him.
Little did I know he was tricking me and it was an extra 5km, but my love of
races was born. So we stepped it up to 21km, then 32km and eventually a
marathon. Now, we’re ticking off 100-milers! You just go, and Pieter always
encourages me if I feel like stopping. I managed to get 805km for a silver
medal in the 1000km Challenge. At races across Gauteng, we get a great
reception from runners. When there’s a steep incline, they’re more than happy
to push and help. It’s always a fun experience and we joke along the way.

Pieter and I race in our normal day-to-day chairs,
just to show athletes that it doesn’t take a big expense to start! While we
struggle to wheel on grass at most finishes, we carry on! What’s life without a
few hiccups, anyway? If you try one race, who knows what can happen? It has
definitely changed me as a person – I knew that I could do so much more than
sitting at home.

I feel like Fanus and I have had two lifespans in one
– one on our feet and one on wheels. I was involved in a car accident back in
1992 and was left paralysed from the abdomen down. About five years ago, I met
Thea Wilkins and the wheelchair group at Rademeyers, ‘The Kloofies,’ and they
convinced me to do my first 5km. After that I never thought I’d double it up to
10km, but I got stronger and eventually I met Fanus and conned him into doing
races with me! We use a front freewheel on our normal chairs instead of racing
chairs, because we want to let other wheelchair athletes know that there is no
need for fancy chairs.

It’s been two years now that the 1000km Challenge has
been open to wheelchair athletes and there’s more awareness out there. This year,
I managed to get in 1 200km for a gold medal and it’s been a great experience!
Fanus and I finished in 23:37 at the Dawn to Dusk 100 Miler and were ninth in a
time of 20:21 at the Golden Reef. There are a few more 100-milers we’d like to
do, the Comrades – if we’re allowed one day – as well as the London Marathon. Apart
from some blisters, swollen hands at the end of a race, and flat tyres, we love
every minute of it!

Since I’ve started racing, there’s been an improvement
in my health – my blood pressure has dropped and I’ve got so much confidence!
In the end, it’s a battle against yourself. I always thought I was in the way,
but now there’s so much support. People tell us that we’re an inspiration, but
it’s the runners who boost us!