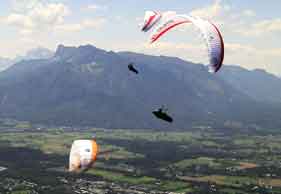 Imagine an event where only 31 of the world’s toughest adventure athletes get chosen to take part. Now imagine these guys running or hiking at least 80km per day in harsh Alpine conditions, in an 864km non-stop race from Salzburg, Austria to Monaco, and also paragliding off some of the most spectacular mountains. This is the Red Bull X-Alps, one of the toughest endurance events in the world! And Pierre Carter (46), an adventure addict who thrives on new challenges – and incredible heights – will once again represent South Africa at this year’s event on 7 July.

Participants must have mountaineering, running and paragliding experience, and are selected from thousands of applicants worldwide. It is the third time that Pierre will be taking part in the X-Alps and he hopes that it will be third time lucky. In 2009 he went in with little experience of that part of the world and crashed on the third day, eventually finishing 28th. “In 2011 I tackled it again, a bit more prepared, and I was in the top 10 for the first couple of days, but unfortunately picked up a stomach bug and finished 21st. This year I am hoping to finish in the top 10,” says Pierre.

PIECES OF THE PUZZLE
The exact route is only revealed close to the time and contestants can then choose how they get to the finish. “That means you combine, running, hiking and paragliding by either following the road or gliding over some of the mountains,” says Pierre, who started his career as a rock climber before he saw world-renowned SA rock climber Andrew de Klerk paragliding off a peak in Peru. “I then thought this is the way to go!” Pierre quickly moved through the ranks and made a name for himself competing as part of a team at several world championship events in France, Switzerland and Japan, while also earning his Springbok colours.

X-Alps participants have to carry their kit of about 14kg and hike or run the route while they wait for good weather to fly as far as they can. Conditions are usually harsh, with a lot of rain and snow. “It all depends on weather conditions and your technical flying ability as to how far you will fly and how far you will hike or run. I usually hike and run 500km and cover about 250km with my paraglider.” Training for an event such as the Red Bull X-Alps is not for sissies, he says. “I fly as much as I can on weekends. I’m also following an ultra-marathon running programme over 22 weeks, with a peak week of 180km.”

MASSIVE UNDERTAKING
The race has no entry fee but the costs to get there and then get around once there are astronomical, and can run up to R80 000. “I am therefore very grateful to my sponsors, which include Muscle Science, Blue Eyewear, First Ascent, Innovate, Red Bull and Gradient Paragliders. Also, James Braid, an experienced paragliding pilot, is my second at the race. He thinks for me, informs me of the weather, helps find the best routes, supplies food and organises meeting spots.”

As soon as the winner reaches the finish line in Monaco, the rest of the field are informed and given 24 hours to get as far as they can before the race is stopped and contestants are placed. The best part of the race is that all entrants are ‘obliged’ to get themselves to Monaco for the party of the year. “Then it is time to put my feet up and allow them to heal. My next goal will be to prepare for my next summit,” says Pierre. (See sidebar.)

UP FOR THE CHALLENGE?
Who would be quicker in the majestic Drakensberg: Paragliders, runners or cyclists? Pierre is putting this to the test in a brand new event he is organising, the 180km X-Berg Challenge (20-24 March), starting at Oliviershoek Pass and finishing at Underberg. More info: pjtdooleycontracting@telkomsa.net or linda.sahpa@gmail.com.

FLYING THE SEVEN SUMMITS
About 10 years ago Pierre set himself the goal of climbing the summits of the highest mountains of each of the seven continents and paragliding from them. Together with an experienced team he has already tackled Mt Elbrus (Europe, July 2010), Mt Aconcagua (South America, January 2011) and Mt Kilimanjaro (Africa, September 2011). “It takes about eight days to climb Kilimanjaro and another two days to climb down. It takes a mere hour to fly down, which means we are in the bar having a beer while others are still climbing,” says Pierre. The team is hoping to document their journey and in the process raise funds for charity – follow their progress at www.7summits7flights.co.za.
-end-