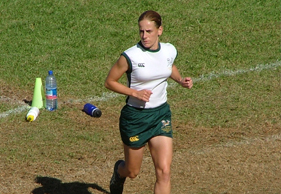 Most of us know the basic
rules of touch rugby, but in 6-Down, teams have six ‘downs,’ or restarts, to
score a try, after which possession is turned over. When touched while carrying
the ball, a player must place the ball on the ground and step over it – this is
called a rollball – and a teammate then picks up and continues play. “The game
is virtually non-stop, so you need to be really fit,” says Gill, “and there is
a lot of strategy involved. We use a driving strategy to draw the defence in on
the initial downs, then closer to the try line we use line moves.”

The sport is played by
teams of six players on a half rugby field, with rolling subs, either in men’s,
women’s or mixed (minimum three women) combinations. “The nice thing about
6-Down is that it is cheap to play – you just need a field and a ball – and you
can play competitively or socially,” says Gill. “Touch is also a great way to
get a good workout, plus it has an enjoyable social side. I have made good
friends through the sport.”

Gill (37) grew up in Cape
Town, then studied BA Human Movement Studies at Stellenbosch University,
followed by a teaching diploma. She began teaching at Rustenburg High School for
Girls in Cape Town in 1998, then taught in the UK from 2001 to 2003 before returning
to Rustenburg. Last year she was promoted to Deputy Principal: Pastoral Care,
and she coaches the school’s Touch first team.

It was at varsity that Gill
was introduced to 6-Down. “In my third year, some guys in the department invited
us to play, and a couple of us girls thought why not. We had a couple of practices,
then played the Western Province team – and got thumped. A lot of us then
entered the Cape Town league and soon improved.” The following year Gill made
the Western Province team, going on to be selected for the SA squad for the
last three World Cups, in Japan (2003), South Africa (2007) and Scotland (2011),
and helping the SA mixed team finish fourth in Japan and third in SA, then
leading the over-30s senior mixed team to third in Scotland.

Overall, the SA team did
well to finish third at all three World Cups, but Gill says getting to these
tournaments is a challenge. “Touch is a small sport and we need to pay own way.
The next World Cup is in Australia, so it may not be SA’s strongest team going.
Also, a lot of younger players come from less privileged communities and can’t
afford tours for provincial tournaments, let alone World Cups.”

6-Down is now played in a
number of countries, with Australia, New Zealand, South Africa and England
leading the way. “In many countries, the sport was introduced by an Aussie,
Kiwi or SA player who helped get it started,” says Gill. “Here in SA, Touch is massive
in schools in Gauteng, with some schools entering eight teams. At Rustenburg we
have at least four teams each season, and a number of other schools are now
offering Touch. So I’m going to keep playing for now, maybe try for another
World Cup, but soon it could be time to let the youngsters come through. Still,
they need a bit of experience on the field…”